A photo of a purported magazine article has been shared repeatedly in Facebook posts that claim it shows a Sri Lankan official blamed the island nation's president for toxic food products found in the country. The claim is false: the photo has been doctored from a magazine article that did not mention Sri Lanka's president.

It purports to show a magazine interview with Siddhika Senaratne, the head of Sri Lanka’s Standards Institute, a national regulatory body that oversees the quality of consumer goods.

“I am doing what the President has tasked me with. I am personally against toxins (in food),” the article's headline reads.

The headline appears to suggest that Senaratne was blaming Sri Lanka's President Gotabaya Rajapaksa for toxic food products found in the country.

In an earlier interview with Sri Lankan media outlet Hiru News, she said she suspected that various products in Sri Lanka contained toxins. She refused, however, to name the specific products over commercial concerns, according to the report.

“Yet you still get off scot-free,” the photo's Sinhala-language reads, referring to Senaratne. 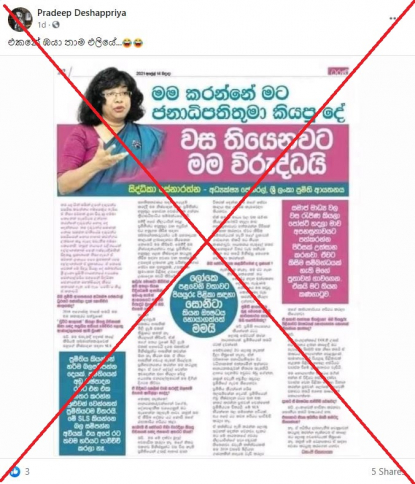 The misleading post circulated online after Sri Lankan authorities confiscated thousands of litres of imported coconut oil that were found to contain a cancer-causing toxin.

An identical photo was also shared alongside a similar claim here, here and here on Facebook.

The claim is false: the photo shows a doctored magazine article.

Keyword searches found the original article was published by the local magazine Dharanee on April 14, 2021.

The article's original headline reads: “I am against toxins being found, not simply a milligram but even 0.1% in food”.

Below is a screenshot comparison showing the doctored article in the misleading posts (L) and the genuine article (R): 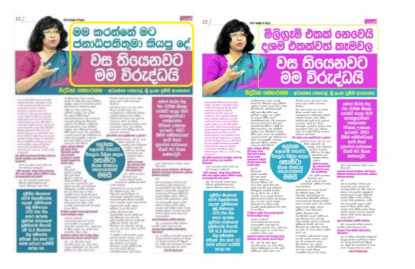 The original Dharanee article does not contain any mention of President Rajapaksa.

Further keyword searches also did not yield any reliable news reports that indicate Senaratne blamed the president for toxic food products in the country, as the misleading posts claimed.