As millions of Indians headed to the polls in Uttar Pradesh elections, Facebook posts purported to show a photo of construction of a gas pipeline in the state. The image has been shared in a misleading context; it was taken in 2010 and shows a pipeline in Germany.

The image was posted here on January 17, 2022 on a fan page for Indian Prime Minister Narendra Modi with more than 450,000 followers.

The image appears to show construction workers lowering a section of pipe into the ground.

"World’s longest LPG pipeline coming up in UP’s Gorakhpur, to be commissioned in 2023," reads text superimposed on the image.

"The Kandla-Gorakhpur pipeline is being built at a cost of Indian rupees 10,000 crores. The 2757 Km long pipeline will supply gas to 34 crore households." 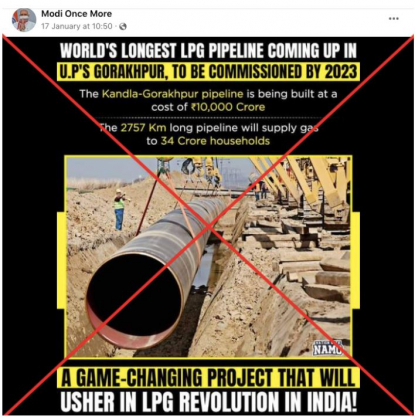 The Kandla-Gorakhpur LPG pipeline project will stretch more than 2,800 kilometers and cost 10,088 crore rupees ($1.3 billion), according to IHB limited, which is leading the project.

The pipeline will supply gas to around 340 million people in Gujarat, Madhya Pradesh and Uttar Pradesh, it said on its website.

Modi laid the foundation stone of the pipeline in Gorakhpur city in Uttar Pradesh on February 24, 2019.

The image of the pipeline circulated ahead of state elections in Uttar Pradesh -- India's most populous state home to more than 200 million people -- held from February 10 to March 7, 2022.

The same image was shared in Facebook posts here and here; and on Twitter here, and here.

Some social media users appeared to believe the photo showed the Kandla-Gorakhpur project.

"This is a direct result of the collaboration between State and Union Govts. People should bear this in mind while voting in the coming election," one person wrote.

The LPG project was commissioned in 2019. AFP found no reports that gave an expected completion date.

A reverse image search on Yandex found the original photo was published here by Getty Images on April 8, 2010.

The photo caption says it shows construction of the OPAL pipeline in Germany.

The photo caption reads: "A worker shouts commands as cranes lower a section of pipe into the ground for the OPAL pipeline on April 8, 2010 near Lubmin, Germany. The OPAL and NEL pipelines will carry natural gas from Russia arriving through the Nord Stream pipeline from the Baltic Sea across Germany and to other countries in Europe... (Photo by Sean Gallup/Getty Images)".

Below is a screenshot comparison of the misleading image (left) and the 2010 photo by Getty Images (right).

The New York Times used the same photo in an article published on April 8, 2010 about the pipeline construction in Germany.