A video has been viewed tens of thousands of times in multiple social media posts in January 2022 alongside a claim it shows Ukrainian troops "preparing for potential combat" at the border with Russia. The posts circulated online as Moscow amassed troops on Ukraine's borders, raising fears it was preparing a possible invasion of its pro-Western neighbour. However, the video has circulated online since at least 2020 in a post by a Ukrainian military command about its troops conducting a military exercise.

It shows an aerial view of a group of soldiers marching in a large field with rows of tanks.

The simplified-Chinese text superimposed on the video translates to English as: "Ukraine troops gathered on the border." 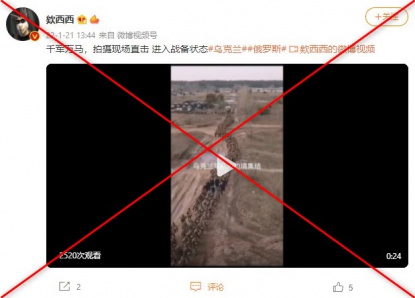 A screenshot, taken on February 1, 2022, of the misleading post.

The post circulated online after the Kremlin massed more than 100,000 troops along the border with Ukraine, sparking fears from the West that Russian President Vladimir Putin was planning a major incursion, AFP reported here.

Moscow denied it would invade and blamed NATO for threatening its security by expanding into eastern Europe.

An identical video was shared on Weibo here and here alongside a similar claim.

In fact, the video has circulated online since at least 2020.

A reverse image search on Google found a longer version of the video published here on YouTube on March 5, 2020, by Defense Express, a Ukraine-based magazine that covers Ukraine military and defence policy.

The video is titled: "Mechanised Brigade of the Armed Forces of Ukraine: what is the combat power of the army."

"Defense Express filmed one of the mechanised brigades of the armed forces of Ukraine, which conducted a control practical exercise at one of the ranges," the video's description reads in part. 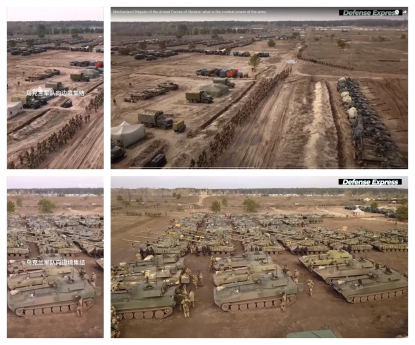 The YouTube description links to a longer report here by Defense Express, which says the exercise assessed the military command's preparedness for combat.

The same video was also shared on Facebook on March 6, 2020, by an official account for a Ukrainian military command based in northern Ukraine.

The post's Ukrainian-language caption -- which credits the footage to Defense Express -- states it shows the command's troops conducting a military exercise. It does not include details on where the exercise was conducted.

"Strength and power of the Ukrainian Armed Forces, on the scale of a mechanised brigade of the Operational Command "North", from Defense Express.

"Above the old Soviet standards, with the latest developments, professional staff, prospects and potential. #Together_for_victory."