Facebook posts circulating in Malaysia claim photos of a politician posing after his first and second Covid-19 vaccine doses were in fact taken on the same day, accusing him of lying about being double-jabbed. The posts point to the fact he appears to be wearing the same outfit in both photos. The claim is false; while Khairy Jamaluddin wore the same black t-shirt and trousers to both his Covid-19 vaccinations in March and April 2021, he sported different shoes and socks.

It shows two photos of Khairy wearing a black t-shirt. In the first picture, he holds a placard that reads: "I have been vaccinated" while in the second picture, his placard reads: "I completed two doses".

"Only the placard is different. FATE OR COINCIDENCE??? Or just the same image taken before editing for media posts?" it adds. 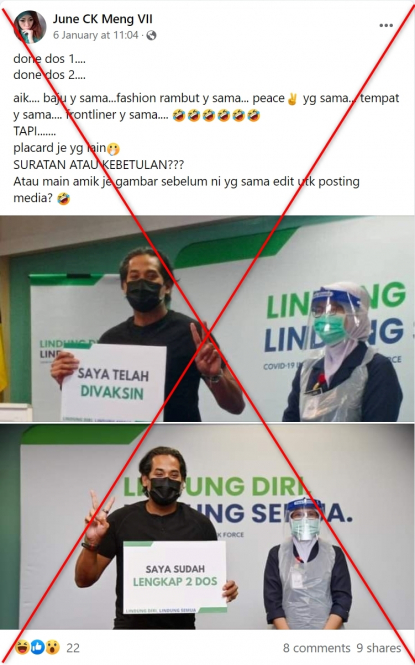 Khairy, who was then chief of Malaysia's Covid-19 vaccination programme, became the first person in the country to receive a Covid-19 Sinovac vaccine on March 18, 2021.

He became health minister in August 2021.

The headline reads: "KJ is the first person to receive the Sinovac vaccine shot". 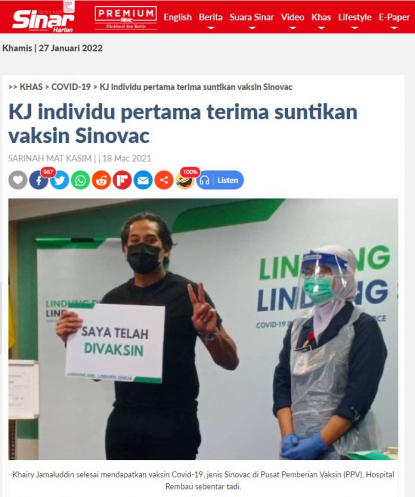 Screenshot of the Sinar Harian report

Photos from Khairy's first Covid-19 vaccination at Rembau Hospital were also posted in a tweet by the Ministry of Science, Technology and Innovation (MOSTI) and in a Facebook post on Khairy's official page on the same day.

The Malay-language tweet reads: "The Honourable @Khairykj received the second dose of the Sinovac vaccine at Rembau Hospital in Negeri Sembilan today, along with frontline workers."

The same photo and other photos from Khairy's second vaccination were posted on his Facebook page and MOSTI's website on the same day.

While Khairy wore a black t-shirt and black trousers for his first and second Covid-19 vaccinations, a closer look at the photos found he was wearing different shoes and socks.

Below is a screenshot comparison of photos from Khairy's first vaccination:

Below is a close-up comparison of his footwear and socks during the first vaccination appointment. 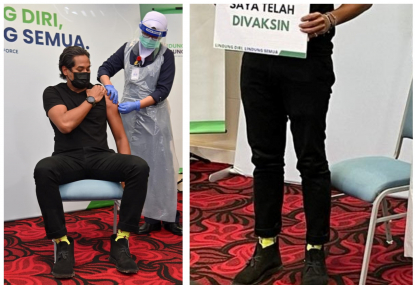 For his second vaccine on April 8, 2021, he sported a pair of black trainers with white trimmings and turquoise amd yellow socks, as seen in photos here and here.

Below is a screenshot comparison of photos from Khairy's second vaccination:

Below is a close-up comparison of his footwear and socks during the second vaccination appointment. 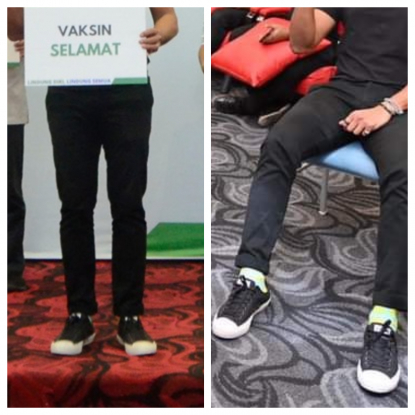 Khairy's press secretary Raja Syahrir Abu Bakar told AFP: "He wore same t-shirt for both occasions. But you can see the shoes and socks are different."

Malaysia kicked off its Covid-19 vaccination campaign on February 24, 2021, with then-prime minister Muhyiddin Yassin receiving the first dose of the Pfizer-BioNTech jab.

The latest data, from February 7, 2022, shows that nearly 80% of the Malaysian population have received two vaccine doses.