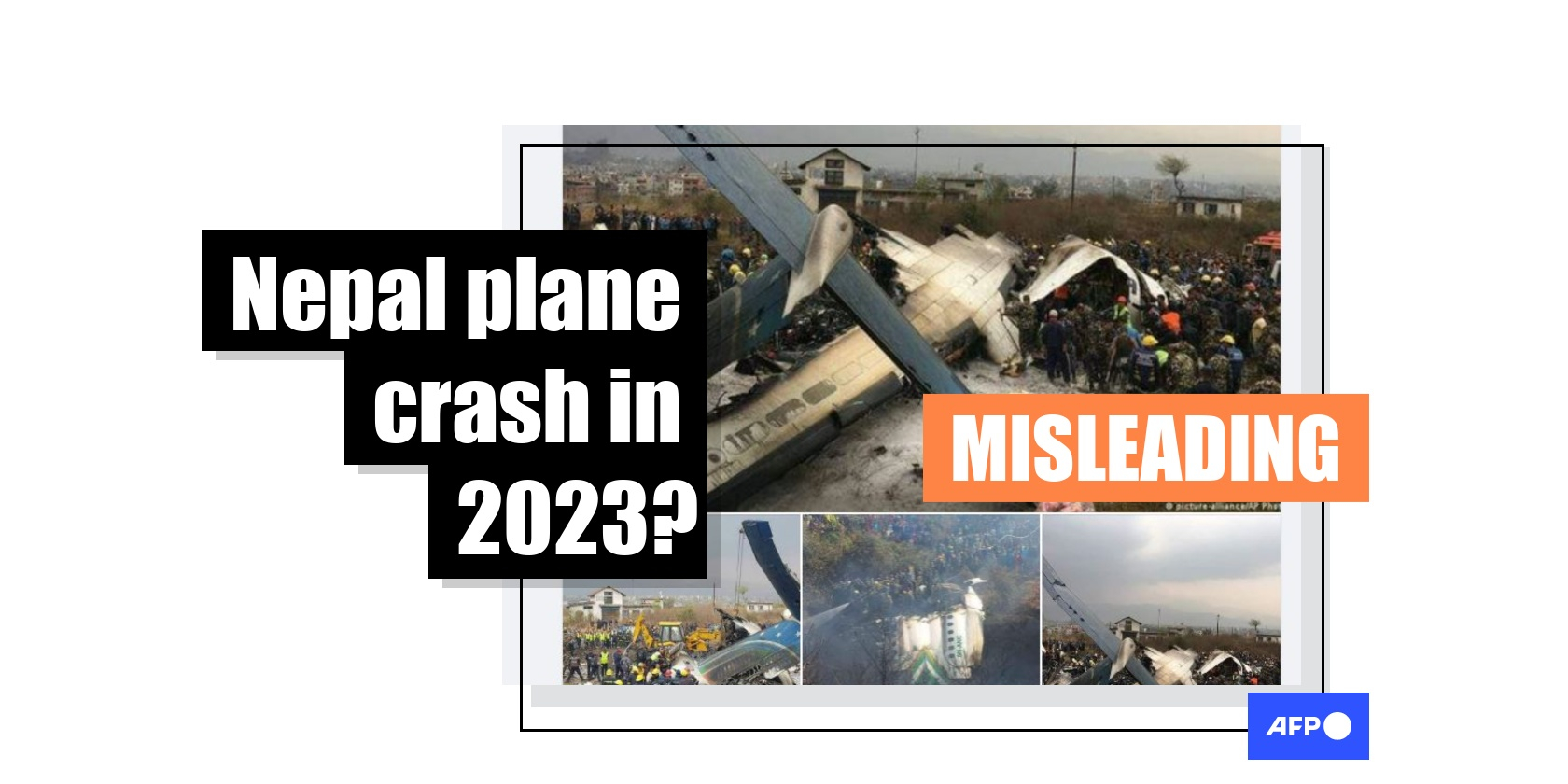 Photos of Nepal plane crash in 2018 resurface in misleading posts

After a plane with 72 people on board crashed in Nepal, photos surfaced in Facebook posts misleadingly claiming they showed the aftermath of the disaster. The pictures were actually taken after a different plane crash in Nepal in March 2018, in which 51 people were killed.

"Horrific plane crash in Nepal. With 72 passengers onboard, the plane was engulfed in flames immediately after the crash," reads a Bengali-language Facebook post shared on January 15.

A Yeti Airlines flight with 68 passengers and four crew crashed near the city of Pokhara in Nepal on the same day, in the country's worst aviation disaster in three decades.

All those on board, including six children and 15 foreigners, are believed to have died. 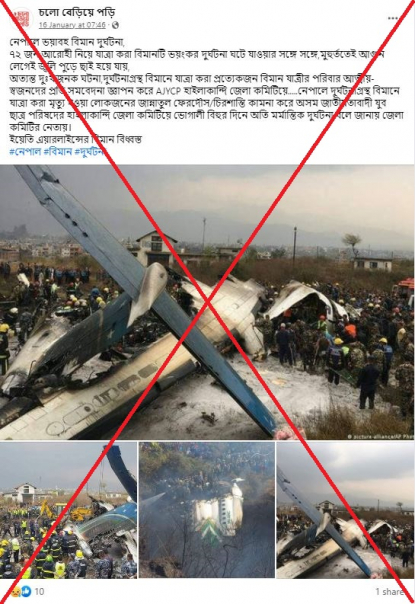 However, only one of the photos shows the wreckage from the disaster in January 2023.

The photo of part of a plane with the registration "9N ANC" printed on the side was taken by AFP photojournalist Prakash Mathema on January 16, as Nepal observed a day of mourning for the victims.

The photos circulated in similar Facebook posts, some of which shared a string of pictures purportedly taken after the crash, including here, here and here,

AFP's Prakash Mathema also took the photo of plane debris surrounded by rescue workers with a digger -- but after a different plane crash in Nepal.

According to the photo caption, the picture was taken on March 12, 2018 after a US-Bangla Airlines flight crash-landed near Kathmandu's international airport.

Fifty-one people were killed and 20 seriously injured in the crash, with an investigation by Nepali authorities concluding that pilot disorientation and a lack of situational awareness led to the disaster.

Below is a screenshot comparison of the photo shared in misleading posts (left) and the original AFP photo (right):

The second photo was also taken by Prakash Mathema at the site of the March 2018 crash.

The photo caption in AFP's archives reads: "An airplane taxis at the international airport in Kathmandu on March 13, 2018, near the wreckage of a US-Bangla Airlines plane that crashed on March 12."

Below is a screenshot comparison of the photo shared in misleading posts (left) and the original AFP photo (right):

A reverse image search on Google found the third photo in the archives of the Associated Press (AP) news agency.

The photo caption reads: "Nepalese rescuers stand near a passenger plane from Bangladesh that crashed at the airport in Kathmandu, Nepal, on March 12, 2018."

The same photo has been previously shared in misleading posts about Nepal plane crash in January 2023.

Below is a screenshot comparison of the misleadingly shared photo (left) and the photo published by AP (right):

Nepal's aviation industry has boomed in recent years but has been plagued by poor safety due to insufficient training and maintenance.

Nepal also has some of the world's trickiest and most remote runways, flanked by snow-capped peaks with difficult approaches and capricious weather.

Its deadliest aviation accident occurred in 1992, when all 167 people on a Pakistan International Airlines jet were killed when it crashed on approach to Kathmandu.