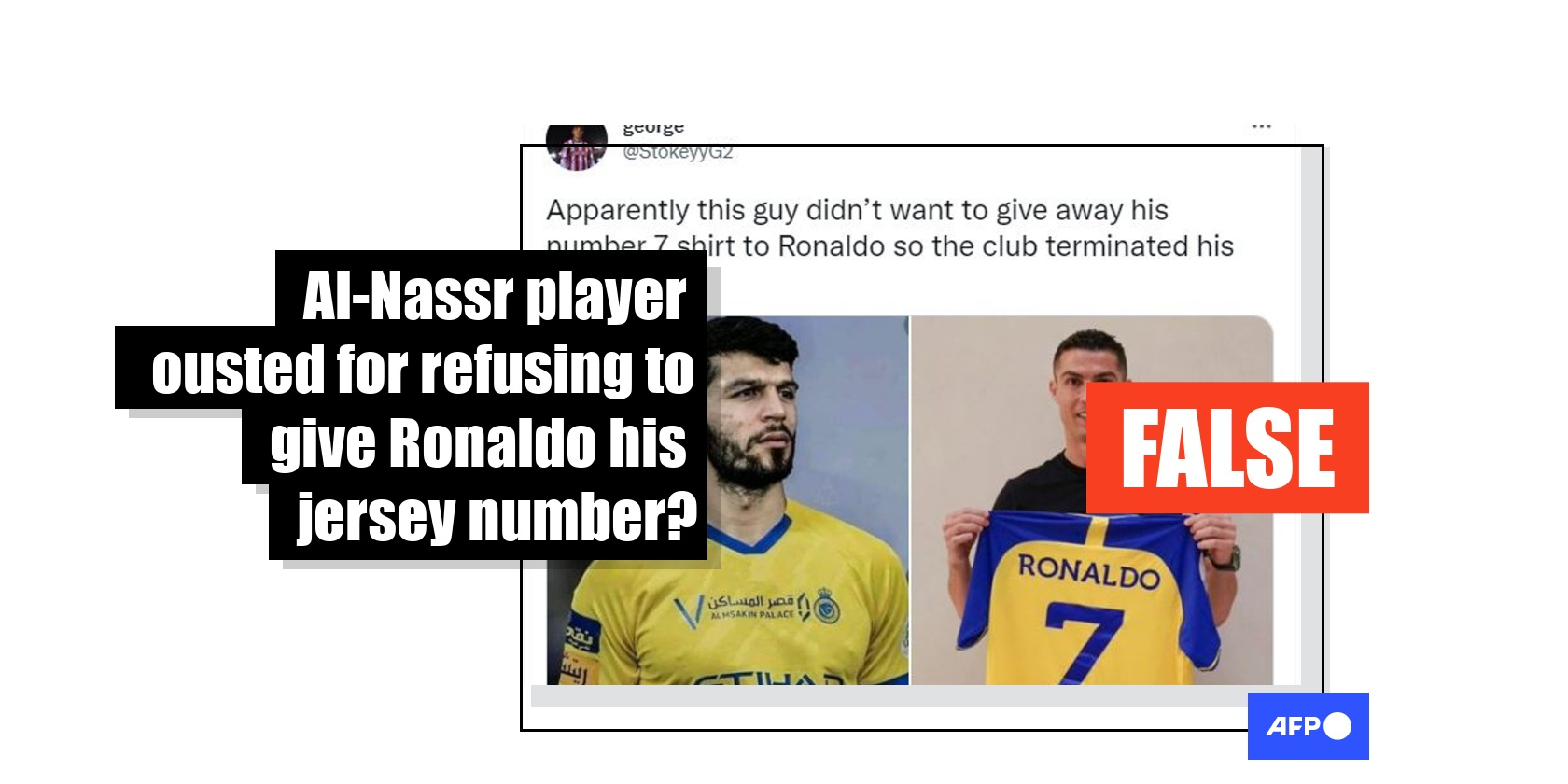 Multiple social media posts have claimed that Saudi football club Al-Nassr fired one of their players, Jaloliddin Masharipov of Uzbekistan for refusing to give his jersey number to the team’s latest recruit, Portuguese star Cristiano Ronaldo. However, this is false: Masharipov had switched to jersey number 77 prior to Ronaldo’s arrival. While the Uzbek player may leave the team, a club representative said this would be due to Saudi football league regulations limiting the number of foreign players, and nothing to do with Ronaldo’s jersey.

“Apparently this guy didn’t want to give away his number 7 shirt to Ronaldo so the club terminated his contract,” reads a tweet published on January 1, 2023, and shared more than 7,900 times since.

The tweet includes pictures of Masharipov wearing a yellow Al-Nassr jersey and Ronaldo displaying his new Al-Nassr team shirt with his name and the number 7 on the back. The claim appeared elsewhere on Twitter and Facebook (see here and here). It also circulated in French and was debunked here. 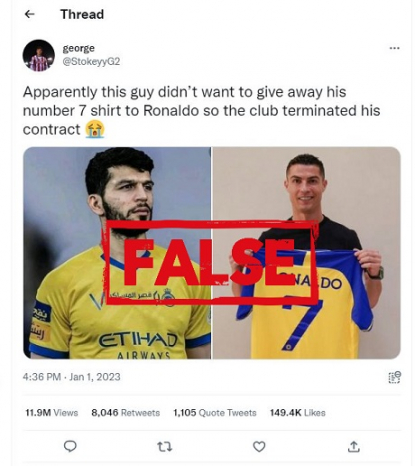 A screenshot showing the false claim, taken on January 5, 2023

Following the termination of his contract by “mutual consent” with Manchester United, Ronaldo signed a two-year contract with the Saudi-based football club Al-Nassr and was assigned the jersey number 7 -- previously worn by Masharipov.

Ronaldo wore the number 7 at his former clubs Manchester United, Real Madrid and Juventus, and with the Portuguese national team.

But the claim that Al-Nassr terminated Masharipov’s contract for refusing to give up his jersey number is false.

Contacted by AFP Fact Check, a representative for the Al-Nassr club denied the claim and said that Masharipov agreed to change his number from 7 to 77 before Ronaldo’s signing was even announced.

Indeed, several photos showing him wearing a 77 jersey were posted by the player on Instagram and on the club’s certified Facebook account before the official announcement on December 30, 2022, that Ronaldo would be joining the team.

Masharipov later posted a photo of himself and Ronaldo, both smiling, taken on January 3, 2023, when the Portuguese star was presented to the club’s fans. In the caption, Masharipov wrote “7/77” in reference to the two players’ respective jersey numbers.

An article published on January 4, 2023, by Arriyadiah, Saudi Arabia’s leading sports newspaper, noted that “Ronaldo's accession to Al-Nassr has increased the number of foreigners in the team to nine, which is one player more than the maximum allowed for each club”.

Spanish sports newspaper Marca reported the same information, and also wrote that “it was decided that the Argentinian Pity Martinez and the Uzbek Jaloliddin Masharipov would leave during the winter transfer window” because of this regulation.

The club’s representative confirmed to AFP Fact Check that Masharipov may eventually leave the club because Saudi league regulations permit each club to register eight foreign players, with only seven allowed on the pitch.