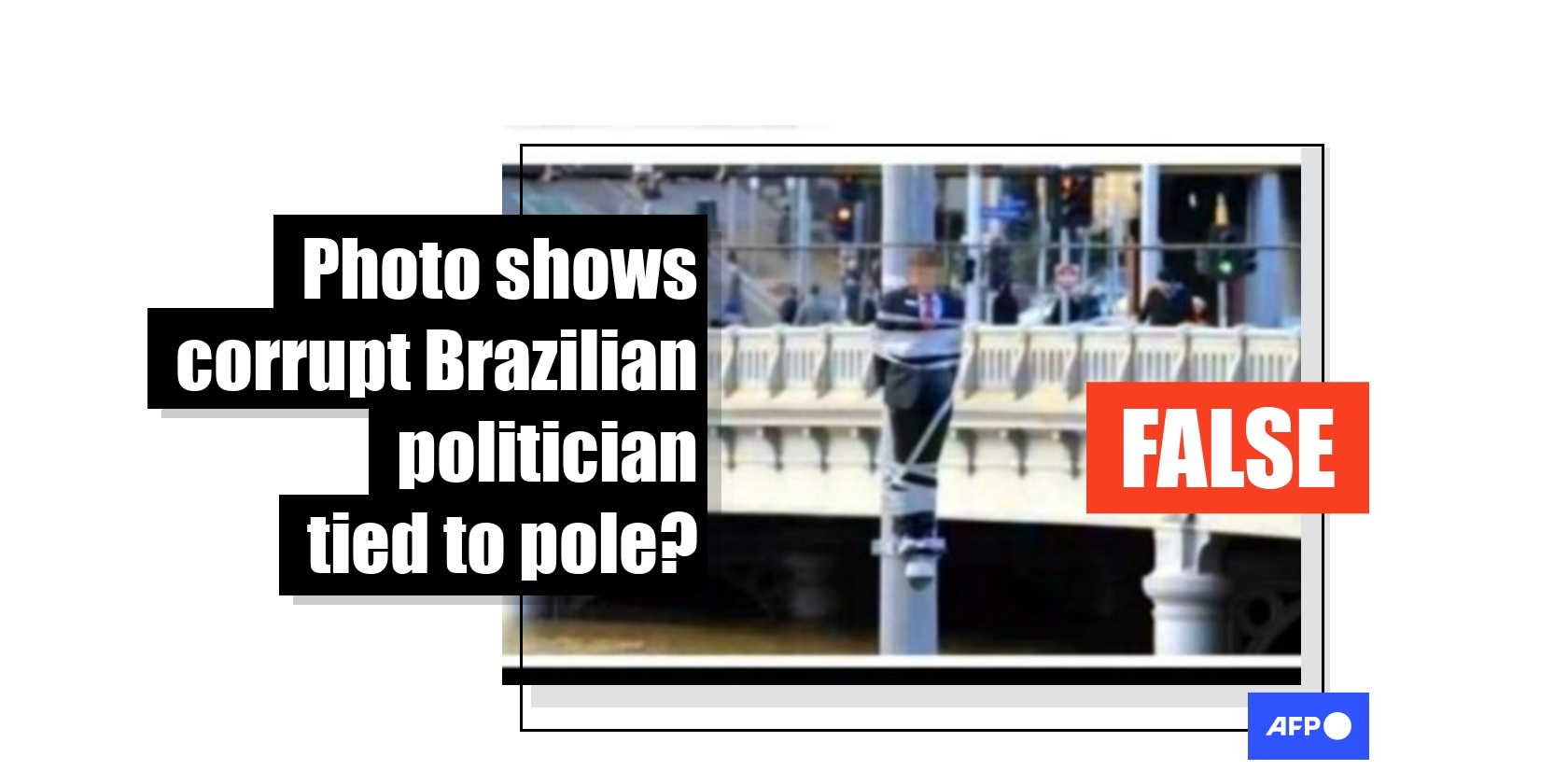 A photo of a man tied to a pole has been repeatedly shared in social media posts in multiple languages that falsely claim it shows a "corrupt Brazilian politician punished by the people". In reality, the photo shows an advertising campaign for an Australian bank in 2011.

"A way to punish politicians who committed crimes. We should urgently introduce this in Korea," reads the Korean-language claim shared here on Facebook on December 16, 2022.

It was shared alongside a photo of a man tied to a pole in what appears to be an urban area.

Korean-language text superimposed above the photo reads: "In Brazil, citizens tie up corrupt politicians who committed crimes to a pole these days. Korea should urgently introduce this. g17.com.br/noticia/ma/pop…pic.twitter.com/poSbtSECDM". 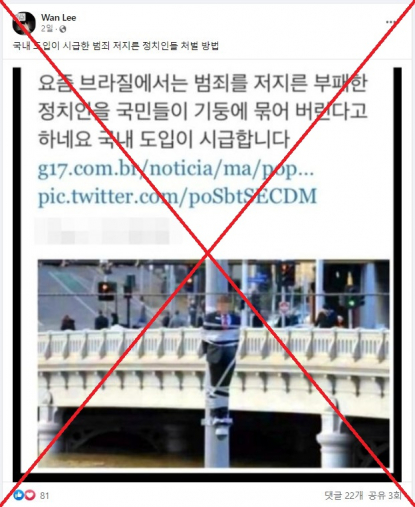 Screenshot of the false claim shared on Facebook. Captured December 19, 2022.

"The people of the Brazilian state of Maranhao tied up a local politician to a pole after they became fed up with corruption," the Portuguese-language report reads in part.

However, G17 described itself as a "humour website that makes satire out of news."

"G17 publishes fantastical, fictitious news, distorted from reality, that should not be taken seriously, much less used as a source of information," its description read.

Comments on the social media posts suggested some people genuinely believed the photo showed a Brazilian politician punished for corruption.

"Wow this is a perfect punishment for politicians in my country as well," reads a user's comment written in Korean.

Another user said: "If we implement this, the National Assembly (South Korean parliament) will shudder out of fear."

The same photo was also shared alongside a similar claim in other languages, including English, Greek and Arabic.

But the image shows a PR campaign staged by an Australian bank in Melbourne in 2011, not a Brazilian politician punished for corruption.

A reverse image search on Google found the corresponding photo published in a report on July 25, 2011, by The Financial Brand, a US-based online publication focused on strategic marketing issues in the retail banking sector.

The report was headlined titled "Bank Has Fun With Series Of Creative Guerilla Stunts."

It reads in part: "Australia's big banks retaliate against the NAB's growing popularity by kidnapping "Doug G," one of the NAB's employees, then wrapping him in duct tape to a light pole in downtown Melbourne. NAB is, of course, behind the prank."

NAB, or National Australian Bank, is one of the largest financial institutions in Australia headquartered in the city of Melbourne.

Below is a screenshot comparison of the image shared alongside the false claim on Facebook (left) and a corresponding mirror image published by The Financial Brand (right):

A separate keyword search on Google found a report by The Sydney Morning Herald that said the bank's campaign, staged by the advertising agency Clemenger BBDO Melbourne, won a public relations award at the Cannes advertising festival.

Other matching photos of the stunt, showing both the actor and the surrounding area in greater detail, were published alongside a similar description on the Ukrainian website Virilejournal.com, which describes itself as a "male career magazine".

AFP found the location of the pole seen in the misleading posts corresponds with a site near Queens Bridge in Melbourne, as seen here:

Below is a screenshot comparison of the image shared alongside the false claim on Facebook (left), one of the photos published on Virilejournal.com (centre), and the corresponding Google Street View imagery (right), with corresponding features highlighted in red by AFP:

Screenshot comparison of the image shared alongside the false claim on Facebook (left), one of the photos published on Virilejournal.com (centre), and the corresponding Google Street View imagery (right).

AFP previously debunked an identical claim after it circulated in French-language posts.