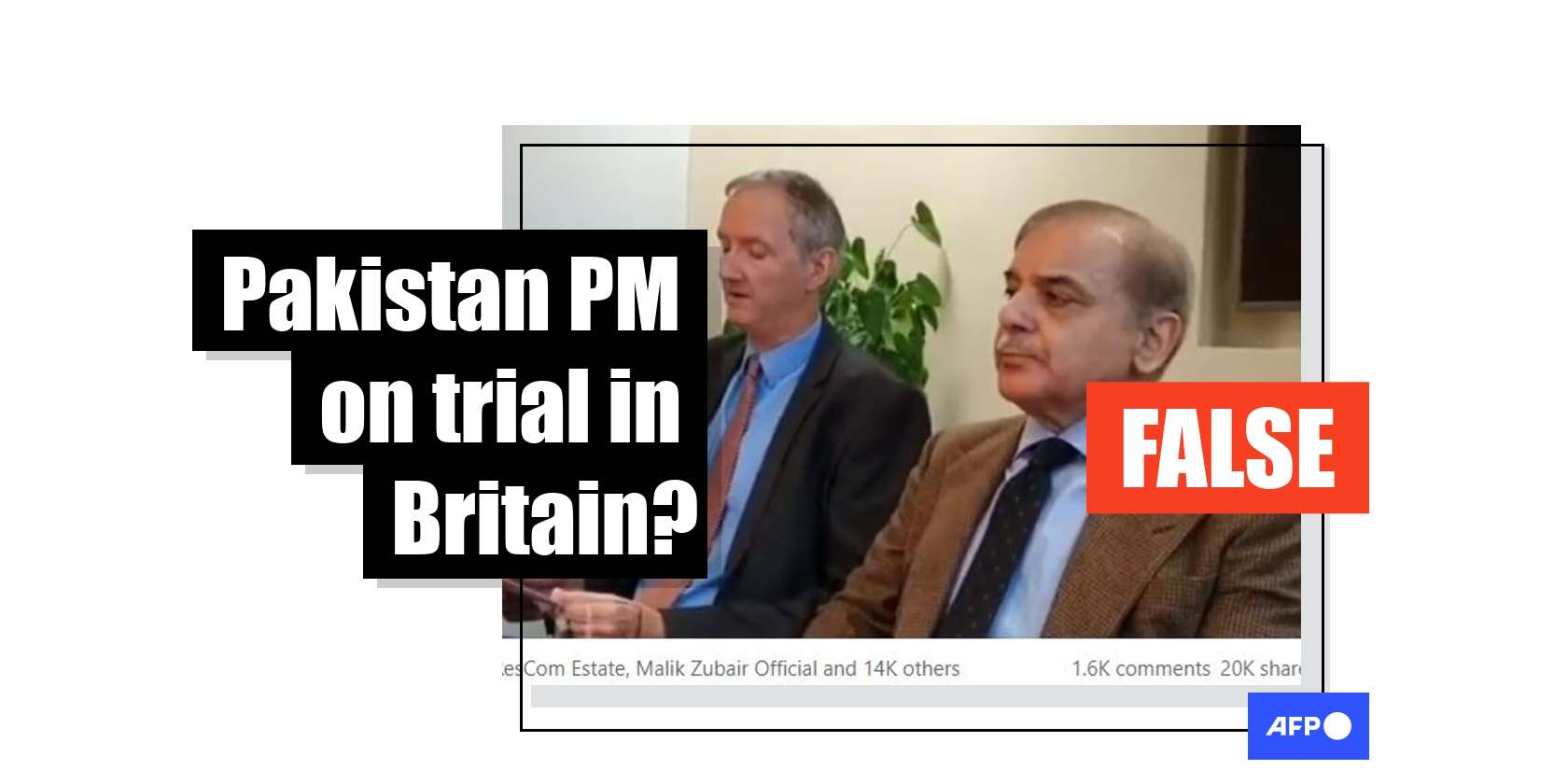 Video shows Shehbaz Sharif at press conference in 2020, not 'on trial' in Britain

As anti-government protesters in Pakistan urged Prime Minister Shehbaz Sharif to call a snap election, opposition politicians shared a video that they falsely claimed shows the leader "on trial" in Britain. The footage actually shows Sharif at a press conference in London in January 2020 after he launched legal action against a newspaper that accused him of embezzling UK government aid. While the case was still ongoing in November 2022, Sharif was not put on trial.

"In a British court, the charge sheet is being read against Pakistan Prime Minister Shehbaz Sharif," wrote Sajid Khan, a member of the opposition Pakistan Tehreek-e-Insaf (PTI) party, in an Urdu-language Facebook post shared on November 18 to his 890,000 followers.

Sharif swept to power in April after ousting his predecessor Imran Khan in a no-confidence vote.

Khan has since campaigned for a snap election, with a series of raucous marches and rallies, while claiming he was pushed out of power in a conspiracy orchestrated by the United States.

The video shows Sharif sitting next to a man reading a statement, who appears to say: "Mr Sharif misappropriated UK taxpayers' money and in particular, government aid intended for the victims of the devastating 2005 earthquake in Pakistan".

The video was widely shared online, including by PTI politician Hussnain Ali Jandanwala, popular YouTube channel Haqeeqat TV and a pro-Khan TikTok account, where it racked up more than 500,000 views.

Some social media users appeared to believe that the footage genuinely showed Sharif "on trail" in Britain.

"What a great judiciary system," one Facebook user commented.

Another wrote: "A symbol of shame for Pakistan."

The full version of the video circulating online reveals it was actually filmed in January 2020, when Sharif announced he had commenced legal proceedings against a newspaper that accused him of misusing British taxpayer's money.

In the full video, which was posted on January 30, 2020 by Pakistan's Samaa TV, Sharif's lawyer says that his client is suing the publisher of the Mail on Sunday and MailOnline newspapers over 2019 reports that he embezzled relief money intended for earthquake victims.

"The articles carried a grotesque allegation that Mr Sharif misappropriated UK taxpayers' money and in particular government aid intended for the victims of the devastating 2005 earthquake in Pakistan," says lawyer Alasdair Pepper.

In the false posts circulating on social media, Pepper's comments have been truncated to make it sound like he is endorsing the allegation that Sharif misappropriated UK taxpayers' money.

Law firm Carter-Ruck published a statement announcing Sharif's decision to take legal action over the allegations and it was widely covered by Pakistani media.

The UK Department for International Development (DFID) refuted the article from July 2019, which was headlined 'Did the family of UK aid’s poster boy steal taxpayers' cash meant for earthquake victims?'

The article is still available on the Mail Online's website, but has been updated to mention the legal proceedings.

While the lawsuit between Sharif and the Mail's publisher was still ongoing in November 2022, there was no evidence that Sharif was put "on trial" in Britain.