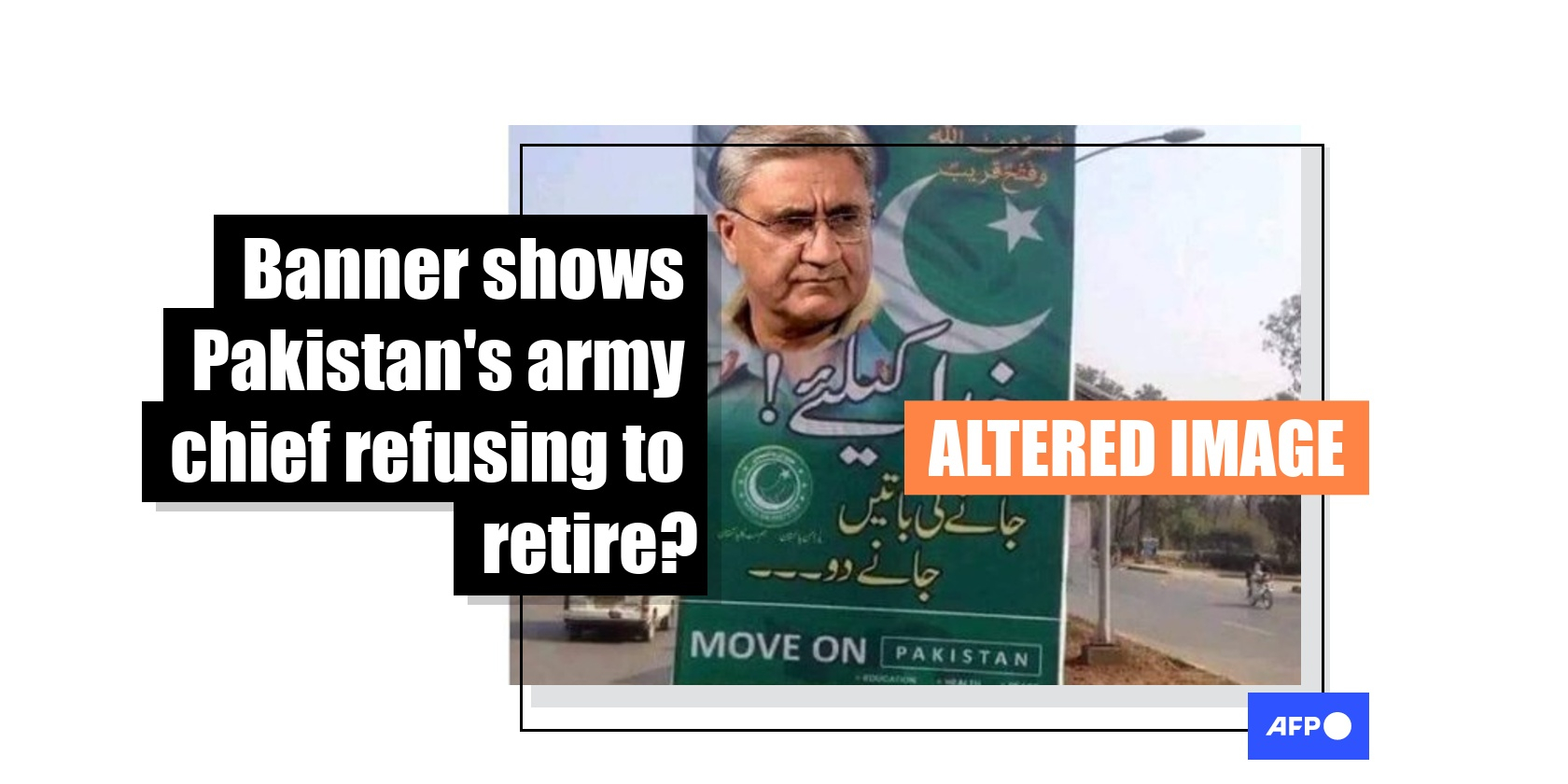 A doctored photo of a sign that appears to show Pakistan's army chief General Qamar Javed Bajwa asking people to stop telling him to retire has been viewed hundreds of thousands of times on social media. The image -- which appeared to fool some people online -- circulated amid speculation about who would replace Bajwa, who has served as head of the military since 2016. The image has in fact been manipulated from an old photo of a placard of Bajwa's predecessor Raheel Sharif.

The manipulated image appears to show a photo of Bajwa on a sign alongside Urdu-language text that reads: "For God’s sake! Let go of the talk of going."

A tweet that shared the photo on November 7, attracting more than 1,200 retweets, says: "To those who put up these banners! For God’s sake, let this country go.

"You’re making the great army chief of Pakistan’s armed forces an object of advertisements now and putting him on par with politicians."

Bajwa, who became head of the military in 2016, announced in October that he would retire at the end of his tenure in late November, Pakistani media outlet Dawn News reported.

His three-year term was extended in 2019, making him one of several army chiefs who have served longer than their initial intended tenure. The post appears to suggest that he was in no hurry to retire, despite his announcement that he would. 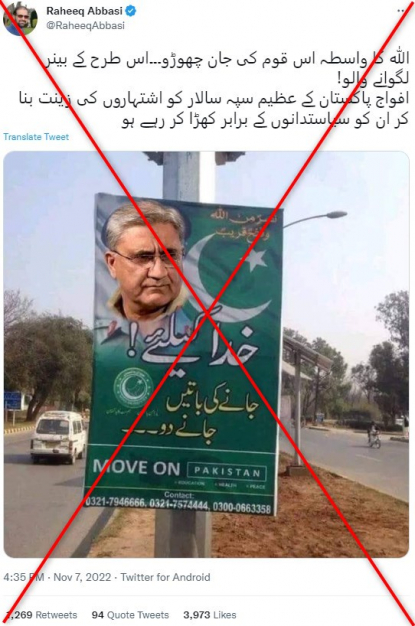 Screenshot of the post with the doctored image, taken on November 9, 2022

The doctored photo was shared in similar posts on Facebook and Twitter, and racked up more than 300,000 views on TikTok.

The posts circulated after a failed assassination attempt on Pakistan's former prime minister Imran Khan, who accused his successor Shehbaz Sharif and a senior intelligence official of helping to plan the attack -- accusations the government denies.

Khan was ousted by a vote of no confidence in April as the economy languished and he lost the backing of the all-powerful military, considered to be the country's true power brokers.

While Khan has hit back at the army leadership at rallies, he has also called on Bajwa to investigate the officials he named in the attempt on his life.

Some social media users appeared to believe the placard was genuine.

"Honestly, it's amazing," read one comment in Urdu. "This guy is the only government employee who starts putting up posters like this when it's time to go."

Another user derided the military for supposedly putting up the banner: "Have some shame ISPR [army's media wing] idiots."

A Google reverse image search found the original photo in a report by Pakistan's Express Tribune from February 9, 2016.

"Days after Army chief General Raheel Sharif announced he would step down later this year, banners have cropped up on the streets of the capital requesting the army chief to amend his decision," it reads. 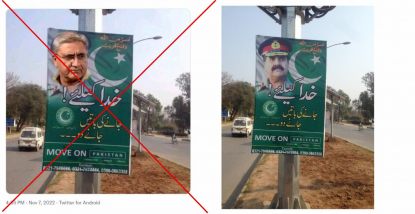 The Express Tribune reported that the poster was part of a campaign by the Move on Pakistan party imploring Bajwa's predecessor, Raheel Sharif, to stay in office.

The party put up posters again in July 2016 urging the popular general to launch a coup.

"Dictatorship is much better than this corrupt government," Ali Hashmi, a representative for Move on Pakistan, told AFP at the time.