Photo of anti-China banner was taken in Los Angeles, not China

A photo has been shared thousands of times in multiple Chinese social media posts alongside a claim it shows an anti-China banner hung in the southern Chinese city of Guangzhou after a rare street protest in Beijing against President Xi Jinping. The claim circulated online during the Chinese Communist Party's 20th Congress, where delegates were expected to hand Xi a historic third term. The photo, however, has been shared in a false context. It actually shows a protest by an anti-China organisation during the Congress in the US city of Los Angeles.

The photo -- which shows a white banner with red Chinese writing hanging from a bridge -- was published here on Twitter on October 18. It has been shared more than 1,400 times.

"There are also people in Guangzhou raising the banner," the tweet's simplified-Chinese caption reads.

The traditional-Chinese text on the banner reads: "Rule of law, not nucleic acid tests. Freedom, not lockdowns. Mother tongue, not Mandarin. Independence, not bondage. No to China, yes to dissolution. No to Guangdong province, yes to the nation of Cantonia."

Guangzhou is a sprawling port city in the southern Chinese province of Guangdong, northwest of Hong Kong. It was formerly known as Canton.

Cantonese is a spoken language originating from Guangzhou and its surrounding area in southeastern China. It is mainly spoken in Guangdong and southern Guangxi provinces of China, as well as in the Chinese territories of Hong Kong and Macau.

While Mandarin has been the official language of China since the 1930s, other regional dialects are still spoken across the country. 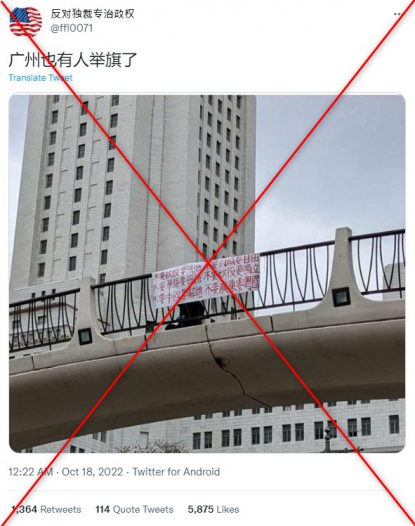 Days before the Congress, a protester scaled a bridge in Beijing's Haidian neighbourhood and hung two hand-painted banners criticising government policies on Covid-19 and calling for the right to vote. Police and security guards quickly swarmed the bridge, and volunteers were deployed to guard other pedestrian bridges across Beijing, while searches for the incident online were heavily censored, AFP reported.

The photo was also shared more than 1,100 times on Twitter and Gettr alongside a similar claim.

But the photo has been shared in a false context. It actually shows an anti-China protest in Los Angeles.

The location shown in the photos corresponds with Google Street View imagery of East Temple Street in LA.

Below is a screenshot comparison of the photo in the false post (left) and the Google Street View imagery (right):

A screenshot comparison of the photo in the misleading post (left) and the Google street view imagery (right).

Another reverse image search on Google found the earliest version of the photo published on Twitter on October 17.

The photo was posted by the Cantonia Independence Party, an organisation that advocates for the independence of China's Guangdong province.

The tweet's caption reads in part: "Today, a member of our party hung a banner criticising China in response to the demonstration on the Beijing Sitong Bridge."

Below is a screenshot comparison of the photo in the false post (left) and the Twitter photo (right):

Jasper Lim, the convenor of the Cantonia Independence Party, told AFP that the photo was taken by one of the group's members in Los Angeles on October 16.

Lim also provided another photo of the banner taken from another angle. Photo of the banner protest in Los Angeles provided by the coonvenor.