Social media posts in multiple languages claim US Vice President Kamala Harris said people of color would be prioritized for Hurricane Ian relief. This is misleading; Harris' full remarks indicate she was talking about distributing resources to communities disproportionately affected by climate change, not allocating aid for the Category 4 storm that recently hit the US.

"Kamala on Hurricane Ian relief: The Biden administration will focus on 'giving resources based on equity' by directing funds to 'communities of color,'" says a September 30, 2022 tweet with a video viewed more than 2.1 million times.

"It is our lowest-income communities and our communities of color that are most impacted by these extreme conditions and impacted by issues that are not of their own making," Harris says in the video. "And so we have to address this in a way that is about giving resources based on equity -- understanding that we fight for equality but we also need to fight for equity, understanding not everyone starts out at the same place."

She added: "And if we want people to be in an equal place, sometimes we have to take into account those disparities and do that work." 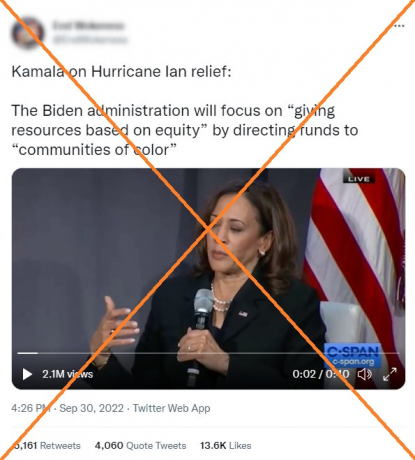 The tweet accumulated more than 5,100 shares and 13,600 likes. Similar claims circulated widely among conservative lawmakers and commentators on Twitter and Facebook, where Representative Marjorie Taylor Greene said hurricanes "do not target people based on the color of their skin."

"Hurricanes do not discriminate. And neither should the federal government giving aid to people suffering from the devastation of Hurricane Ian," said Greene, who has previously promoted misinformation about natural disasters. "Is your husband's life worth less bc he's white?"

The posts, some of which spread in Spanish, come after Hurricane Ian devastated large swaths of Florida, killing more than 100 people and causing billions of dollars' worth of damage. The powerful storm made landfall September 28, 2022 on the US state's southwest coast before hitting the Carolinas.

The Biden administration has made federal disaster assistance available to the states affected by Hurricane Ian. But the White House told AFP the federal government is not divvying up that money based on race.

"No and this has been widely debunked," said Deputy Press Secretary Andrew Bates in an email, pointing to fact checks from other news outlets.

Harris' remarks came in response to a question from Indian actress Priyanka Chopra Jonas about Hurricane Ian relief and the Biden administration's efforts to address climate change, according to news footage and a White House transcript. Experts previously told AFP that global warming is making such storms more intense and potentially more destructive.

Here is the full context of what the vice president said, with the excerpt shared online in bold:

Harris did not mention any specific aid for Hurricane Ian victims. Instead, she made reference to the hundreds of billions of dollars allocated in the Inflation Reduction Act to address climate change.

The Federal Emergency Management Agency (FEMA) has information on its website about applying for Hurricane Ian assistance, but it does not specify any racial requirements for doing so. FEMA Press Secretary Jeremy Edwards confirmed that in a statement emailed to AFP.

"As the vice president said, FEMA has been working with Florida and Puerto Rico to get survivors there the aid and resources they need immediately as they recover," Edwards said. "To be clear, the vice president was referring to a different issue at that time and her comments were focused on long-term climate investments."

The statement added: "As the administration has said across the board, we support all communities, and at FEMA we have undertaken a number of initiatives to make our recovery and resilience programs more accessible."

AFP has fact-checked other false and misleading claims about Hurricane Ian here.

All articles
US POLITICS Huracanes CLIMATE