Thai social media posts have repeatedly shared a false claim that five Southeast Asian countries will stop using the US dollar from November 2022. Financial experts told AFP there was little chance of the countries -- Singapore, Thailand, Indonesia, Malaysia and the Philippines -- abandoning the dollar as it is a global standard and there is no currency that could currently replace it. Thailand's central bank also told AFP the claim is not true and may have stemmed from misunderstanding efforts by ASEAN countries to make mobile payments easier for travellers.

"From November 1, five ASEAN countries will stop using the US dollar," reads a Facebook post shared here on September 26, 2022.

The post includes a graphic that shows the flags of Singapore, Thailand, Indonesia, Malaysia and the Philippines below an image of Thailand's Prime Minister Prayut Chan-O-Cha.

The text on the graphic reads: "(From) Nov 1st, 5 ASEAN countries will stop using the US dollar, switching to local currencies as a payment system for travellers."

ASEAN, the Association of Southeast Asian Nations, comprises 10 countries in the region. Besides the five countries mentioned in the graphic, the organisation also includes Brunei, Cambodia, Laos, Myanmar and Vietnam. 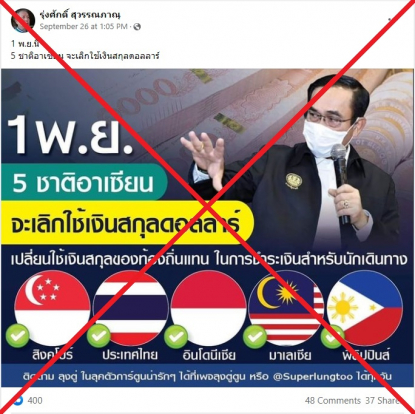 The claim circulated in Thailand as the country's currency -- the Thai baht -- weakened to a 16-year low against the US dollar, according to the Bangkok Post newspaper.

Comments on the posts suggest some people believed the ASEAN countries were abandoning the US dollar.

“Correct. If we peg with the dollar alone, when the dollar appreciates or depreciates, it will affect us. The United States likes to manipulate its currency. We definitely need a choice like this," reads one comment.

"Not long until the US dollar will only be (worthless) paper," reads another.

But the claim that ASEAN countries will stop using the US dollar is false.

US dollar 'is global standard'

Finance experts told AFP there was little chance of the countries abandoning the US dollar.

Dr Somchai Jitsuchon, a research director of inclusive development at the Thailand Development Research Institute (TDRI), told AFP: "This is a rumour. There is a 0.00001 percent chance that it could be possible."

He said it is unlikely that a country would "suddenly stop using the US dollar" since there is currently no currency that could replace it.

"It is the medium of transaction even among countries that don't use the US dollar on a daily basis," said Dr Somchai.

He added that if a country were to abandon the dollar, "they will need at least 10 years for the preparation".

Jitipol Puksamatanan, an investment strategist at UOB Asset Management, also told AFP it would be "uncommon to stop using the US dollar since it is a global standard".

He added that "more than 90 percent of all business transactions (in Thailand) are in the US dollar".

A spokesperson for the Bank of Thailand also told AFP the claim is false and appears to have stemmed from a misunderstanding about ASEAN countries working to make mobile payments easier for travellers.

One project – called Cross-border QR Payment Linkage -- was launched on August 29, 2022, after a trial run that started in August 2021.

"Once (a user) scans the QR code, the exchange rate will immediately pop up and the fee is lower," Siritida said.

She added that Thailand, Malaysia, Indonesia, and Singapore are part of the system, as are Japan, Myanmar, and Vietnam.

The Philippines is not a part of the new system at present, according to the Bank of Thailand.