An image of Kim Jong Un has been shared repeatedly in posts that claim the North Korean leader visited Moscow as Russian President Vladimir Putin delivered a speech in September 2022. Some posts written in Korean also claim South Korean media ignored Kim's visit. But the claim -- which circulated as Russia pushed on with its war in neighbouring Ukraine -- is false. The posts show Kim's visit to the Russian port city of Vladivostok in April 2019 for a summit with Putin.

"This wasn't even reported in domestic [South Korean] media...it looks like very important news. The fact that [Kim] went there during such an urgent time showed this."

The post includes a photo of Kim shaking hands with various official-looking figures that has been taken from this tweet published on September 30, 2022. 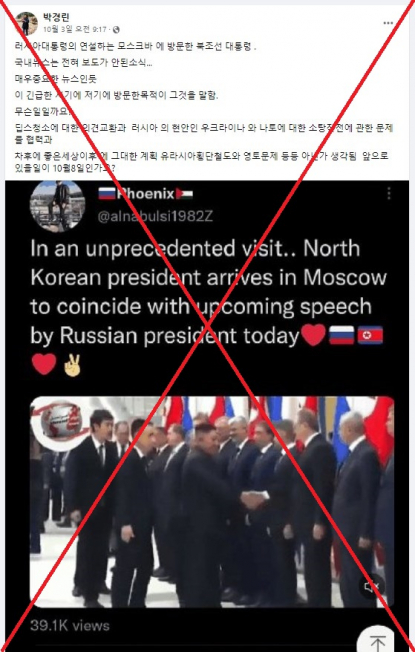 Screenshot of the misleading claim shared on Facebook. Captured October 11, 2022.

Putin delivered a speech on September 30 as he signed treaties to ratify the annexation of areas in Ukraine under Russia's occupation.

North Korea has voiced support for Russia's decision and accused the United States and its allies of acting like a gangster by leading a drive at the UN against Moscow's behaviour, AFP reported on October 3.

The United States and other Western countries have called those referendums shams carried out at gunpoint and vowed never to recognise the annexation.

The same image and a video of Kim with the same officials were shared in similar Korean-language posts here on Twitter and here on Daum Cafe, a South Korean social media website.

As of October 11, there have been no official reports about a meeting between Kim and Putin this year.

The posts actually show Kim greeting Russian delegates during a meeting with Putin in the Russian city of Vladivostok in April 2019.

Below is a screenshot comparison of the image shared in the false Facebook posts (left) and the news footage published by CNA in 2019 (right):

The same footage was published on April 25, 2019 by several other news organisations -- as seen here, here and here.

The Kremlin subsequently released various photos of the meeting between the North Korean and Russian officials on its official website, dated April 25.

In two of the photos, published here and here, Kim and Putin can be seen greeting delegates.

AFP's Spanish-language fact check team previously debunked posts that made a similar claim about the same meeting in 2019.