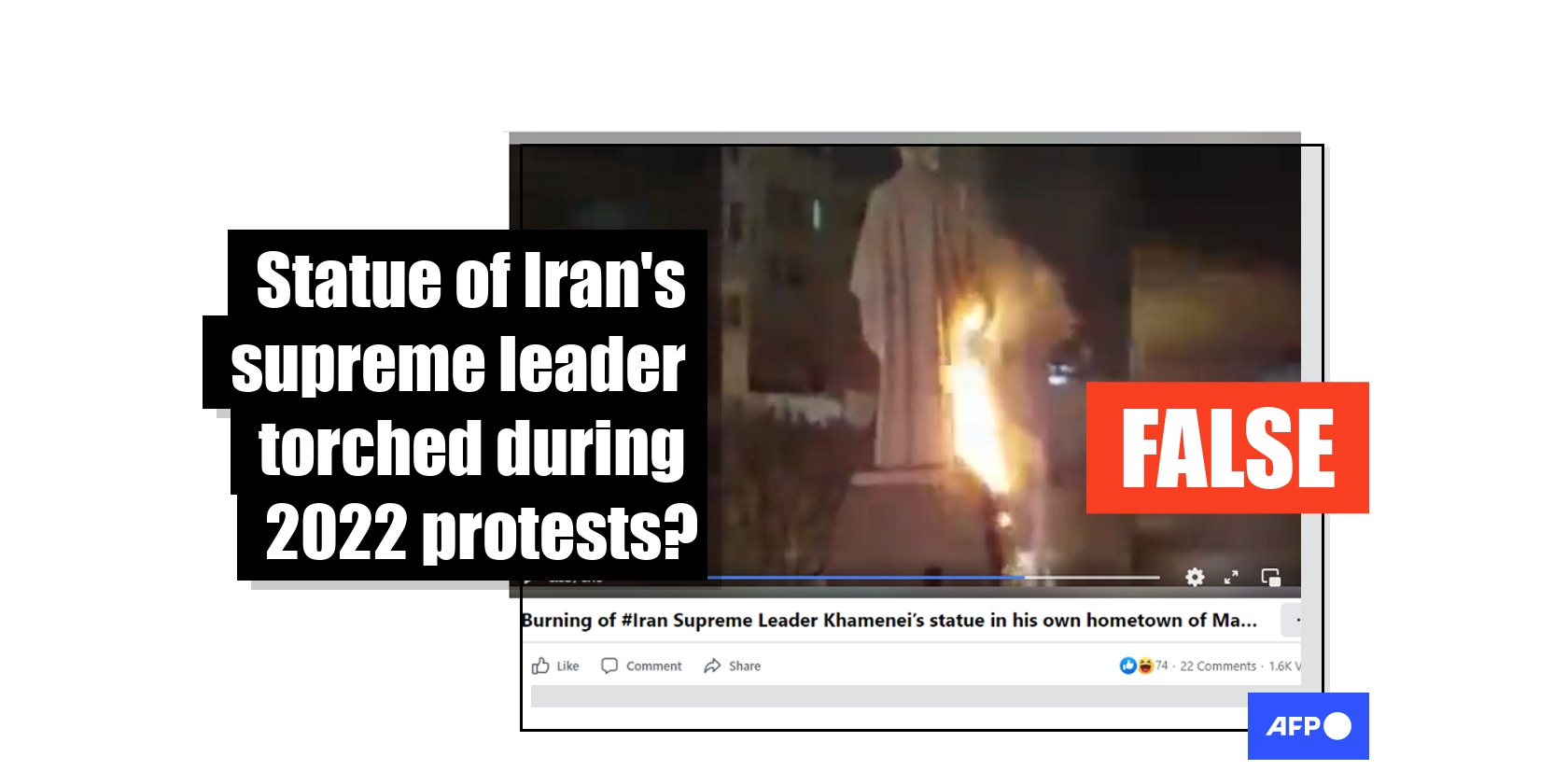 A video has been viewed hundreds of thousands of times on social media alongside a claim it shows Iranian protesters setting a statue of their country's Supreme Leader Ayatollah Ali Khamenei on fire. The post surfaced amid ongoing protests sparked by the death of Mahsa Amini in September 2022 when she was in police custody. However, the claim is false; the statue that was torched was in fact one of the late Iranian cleric and politician Morteza Motahhari in the northeastern city of Mashhad in September 2022. An expert on Iranian politics told AFP that there are no statues of Khamenei in Iran.

The post caption reads: "Burning of #Iran Supreme Leader Khamenei's statue in his own hometown of Mashhad".

Anger over her death sparked the biggest wave of protests across Iran in almost three years, with at least 92 protesters killed and hundreds arrested.

Some international journalists with verified accounts on Twitter also shared the misleading post here and here, with more than 500,000 views.

In India, at least two mainstream media outlets also shared the clip with the claim on their Facebook pages here and here. The videos were viewed tens of thousands of times.

The video identified the statue as one of Morteza Motahhari -- an Iranian cleric, philosopher, and politician with great influence on the country's religious ideology -- in the city of Mashhad in northeast Iran. He was assassinated a few months after the 1979 revolution.

"Protests and burning of the statue of Morteza Motahhari in Mashhad, founder of Hijab philosophy," the video's caption -- written in Persian -- read.

The burning of Motahhari's statue was also reported by Persian-language media outlet PeykeIran here on September 23, 2022. Another outlet, Iran International, also reported on the burning as part of a special report on the Iranian protests. The scene showing the burning can be seen at the 15:32 mark.

The crowd in the video could be heard chanting in Persian: "Death to Khamenei."

Below is a comparison of screengrabs from video in the misleading post (left) and from VOA Persian service's clip (right):

The same scene from the video (left) is also visible in PeykeIran's report (right):

A keyword search for "Motahhari statue Mashhad" (in Persian script) found the images of the statue on Iranian blogs here, here, and here on a Facebook page, with a caption: "Statue of martyr Morteza Motahhari, Mashhad."

The video corresponds with this image on Instant Street View captured in Mashhad's Moalem Square.

Reza Akhbari, an expert on Iranian politics and programme manager at the Institute of War and Peace Reporting in London, told AFP that the statue in the video was one of Motahhari.

"There are no statues of Ayatollah Khamenei in Iran," he said.