Skip to main content
A melting pond inside an iceberg from the Greenland ice sheet in Baffin Bay on July 20, 2022 ( AFP / Kerem Yücel)

An article shared on social media says studies of Greenland show climate change is caused by natural factors, not carbon emissions. This is misleading; scientists cited in the piece say it misrepresents their findings, and the effect of fossil fuels on global warming is well-documented.

"In a major challenge to climate alarmism, climate scientists have shown that Greenland ice has recovered since 2012 and the earlier loss was due to 'natural variability' not human CO2 emissions," says an October 2, 2022 post from The Daily Sceptic Facebook page. 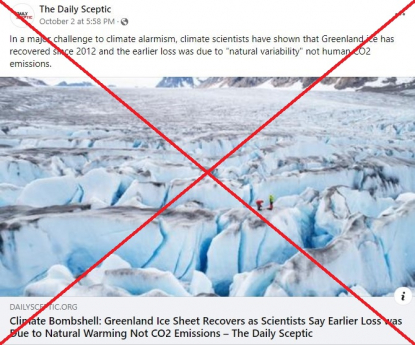 Citing a December 2021 study by Japanese climatologists at Hokkaido University, the article says they attributed slowing warming in Greenland to El Niño, a natural weather phenomenon.

"Such findings play havoc with the simplistic 'settled' science notion that carbon dioxide produced by humans burning fossil fuel is the main, if not only, driver of global temperature warming or cooling," The Daily Sceptic piece says.

However, the lead author of the study, Shinji Matsumura of Japan's National Research Institute for Earth Science and Disaster Resilience, said the findings do not support that claim.

"Our paper is misrepresented on that blog. We do not agree that (the findings) 'play havoc with' the view that human-emitted CO2 is a main driver of global warming," he said in an email on October 5, 2022. "Global average air temperature is rising due to anthropogenic climate change."

Study does not refute global warming

Matsumura, in an article to publicize the research in April 2022, said emissions are driving climate change in Greenland as elsewhere.

"The Greenland ice sheet is melting in the long run due to global warming associated with greenhouse gas emissions, but the pace of that melting has slowed in the last decade," he said in the article published by Hokkaido University. "That slowing was a mystery until our research showed it is connected to changes to the El Niño climate pattern in the Pacific."

The study attempted to explain an observed decline in temperatures and rates of ice-sheet melting in Greenland since 2012. The research showed El Niño triggered cooler temperatures in Greenland by driving cooler air north via cyclones.

The findings "demonstrate how natural changes can act alongside the long-term global warming trend to vary local conditions," the university's article says. In email, Matsumura added that the study does not "undermine the seriousness of climate change or the need to tackle greenhouse gas emissions."

The article said: "We expect that global warming and ice sheet melting in Greenland and the rest of the Arctic will accelerate even further in the future due to the effects of anthropogenic warming."

The Daily Sceptic article cited a number of other studies about periods of warming thousands of years ago.

The website linked to an article that cited a 2007 study led by Takuro Kobashi, an associate professor in the Graduate School of Environmental Studies at Tohoku University.

The authors of that study examined Greenland ice cores to shed light on an abrupt cooling of the climate 8,200 years ago. They found Greenland cooled by up to 3.3 degrees Celsius over 20 years.

That cooling took place during the Holocene, a relatively warm period after the last ice age. The study's authors said the aim was "to quantify possible impacts of future abrupt climate change" from greenhouse gas emissions caused by humans. 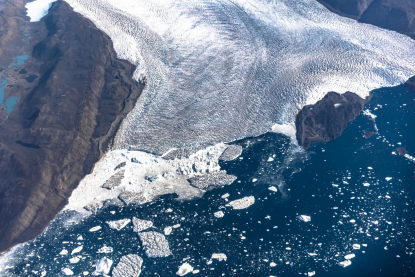 In the Daily Sceptic article, "the writer misunderstood the climate of the Holocene," Kobashi told AFP in an email on October 5, 2022.

He cited another more recent study he authored that examined various factors affecting the climate of Greenland during the period. The study says volcanic activity "played a critical role."

Kobashi said: "Greenland was warmer in the early Holocene because of the Earth's orbital change, but it may be that global average surface temperature is now the warmest."

The Daily Sceptic article also cited information from the US National Snow and Ice Data Center (NSIDC) regarding the extent of Arctic sea ice.

The NSIDC said the minimum extent of Arctic sea ice for 2022, recorded in September, was higher than that recorded in 2012. The article cited this as evidence that "the recovery of Arctic summer sea ice has been spectacular of late."

However, the article misrepresents the data. 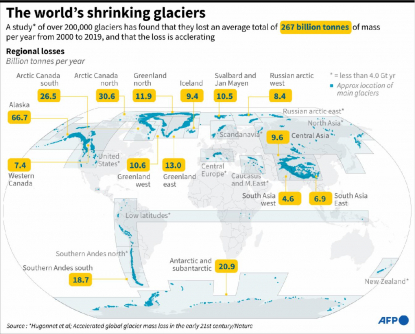 Greenland is among the territories where glaciers are shrinking -- worldwide they lost 267 billion tonnes a year from 2000 to 2019 ( AFP / Laurence CHU, John SAEKI)

The NSIDC said September sea ice had declined by 12.3 percent per decade compared to the 1981-2010 average since records began.

The role of carbon emissions in climate change is well-documented.

Greenhouse gases released from burning fossil fuels trap heat close to the Earth. The UN Intergovernmental Panel on Climate Change (IPCC) summed up the trend in a chart at the start of its major report in August 2021.

The left-hand chart below shows temperatures rising sharply in the past 150 years. In the right-hand chart, the blue line at the bottom shows how much lower global temperatures would be without humans releasing greenhouse gases by burning fossil fuels. 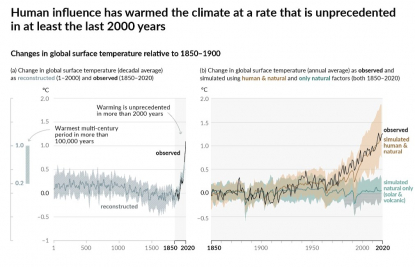 Alongside the Holocene claim, The Daily Sceptic said "numerous other scientists have discovered equally dramatic temperature changes in the recent past."

But experts say records of historic warming periods do not mean emissions are not responsible for the sharp rise in temperatures over the last century and a half.

The claim that recent warming is normal because temperatures have fluctuated before "is just stupid logic," Mike Lockwood, professor of space environment physics at the University of Reading, previously told AFP.

"It is of course true that temperatures have risen and fallen in the past but that is not a reason for assuming that the present change has the same causes as past ones," he said.

The IPCC reviews studies to summarise the state of knowledge about how humans are driving climate change, using reports compiled by hundreds of scientists in dozens of countries.

"It is unequivocal that human influence has warmed the atmosphere, ocean and land," the IPCC said in the first part of its 2021 report.