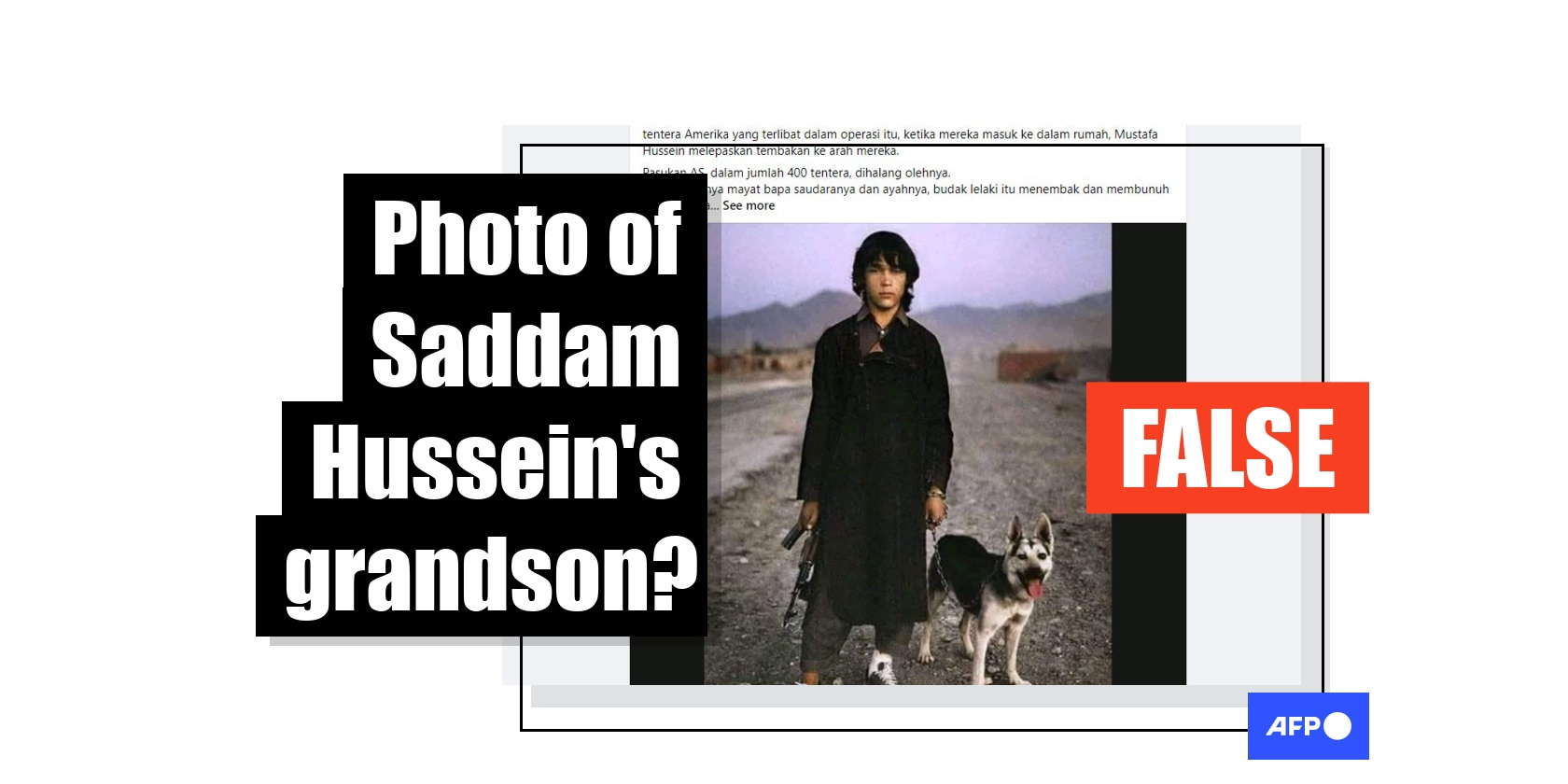 An image of a teenage boy has been shared thousands of times in social media posts that claim it shows the 14-year-old grandson of late Iraqi dictator Saddam Hussein, Mustafa Hussein, who "shot dead 14 US soldiers" during a gunfight that also killed his father and uncle. However, this is false. American photographer Steve McCurry, who took the photo, says it shows an Afghan fighter. According to the US military commander in Iraq at the time, four US soldiers were wounded in the July 2003 raid, which killed Mustafa, his father and uncle.

The photo of a teenager holding a rifle and a dog was posted on Facebook here on September 2, 2022, where it has been shared more than 760 times.

The post's Malaysian-language caption reads: "This boy -- Mustafa Hussein from Iraq -- the 14-year-old grandson of Saddam Hussein, was the last man standing, fighting against US special forces during an operation. According to American soldiers involved in the operation, when they entered the house, Mustafa Hussein opened fire on them.

"The US forces, numbering 400 troops, were stopped by him. In front of the dead bodies of his uncle and father, the boy shot and killed 14 American marines with a sniper rifle. The battle with the grandson of Saddam Hussein lasted for about six hours."

"When the Americans killed the boy, they were in disbelief and even more amazed when they learned that he was a child. At the end of an article commemorating Mustafa, New York Times reporter Robert Yeisk wrote: 'If we had someone like this man in America, we would build a monument in every city. I would talk about his courage everywhere and it would have been a prominent clash'."

Iraqi dictator Saddam Hussein was captured in December 2003, months after a US-led military invasion toppled him from power. He was executed three years later, in December 2006, after being found guilty of crimes against humanity.

His sons, Uday and Qusay Hussein, were killed in a military raid in the Iraqi town of Mosul in July 2003, alongside Qusay's 14-year-old son, Mustafa Hussein, and a bodyguard.

According to US military officials, Mustafa may have been the last to die in the hours-long gun battle and the teenager kept shooting even after his father and uncle had been killed.

The same photo has been shared more than 1,600 times after it also circulated in similar posts on Facebook here, here, here and here; as well as on Twitter here.

The picture also appeared alongside similar claims in English, since at least 2019.

Using a combination of reverse-image and keyword searches, AFP found the photo was posted by American photographer Steve McCurry on his verified Instagram account here on August 14, 2017.

The post's caption reads: "This portrait of an Afghan fighter will be in my new book, AFGHANISTAN, published by @taschen coming out in September."

McCurry is an award-winning photographer famous for his "Afghan Girl" picture.

German-based publisher Taschen confirmed to AFP that the picture is in McCurry's photobook "Afghanistan", which was published in 2017.

Although US officials believed Mustafa Hussein had kept firing throughout a military raid that killed him, his father and uncle, he did not fatally shoot 14 soldiers.

In a video of a press conference on July 23, 2003, uploaded to C-Span here, then US commander of the coalition forces in Iraq Lieutenant General Ricardo Sanchez shared details of the raid in Mosul the previous day.

He said the shootout killed four people in the besieged house and injured four US soldiers.

At the nine-minute, 45-second mark of the video, Sanchez describes four soldiers being wounded as they attempted to enter the second floor of the house. "At this point, our forces withdrew," he said.

An anti-tank missile was deployed at 1:00 pm when the troops re-entered the house, killing three adults, Sanchez said.

As the troops attempted to enter the house for a third time, they shot dead a fourth person who was firing from the second floor, Sanchez said at the 13-minute, 50-second mark of the video. Coalition forces "completed securing the building at about 1400 hours yesterday", the commander said.

American media outlets reported on the raid here, here and here, saying that four soldiers were wounded and the four killed were Uday, Qusay, Mustafa Hussein and a bodyguard.

Mustafa, also written as Mustapha Hussein, appeared in several New York Times reports between July 2003 and August 2007 -- here, here, here, here and here -- none of which were written by "Robert Yeisk".

Online searches found no results of a New York Times journalist with this name.