Video of student carrying classmate to safety was filmed after earthquake in China, not Taiwan

A video that shows a student carrying a classmate with a leg cast to safety during an earthquake has been viewed hundreds of thousands of times online alongside a claim it was filmed after a tremor rocked Taiwan in September. The video, however, has been shared in a false context. It shows an earthquake at a school in southwestern China's Sichuan province in June this year.

The video was shared on the Chinese social media site Weibo on September 18. It has been viewed more than 1,600 times.

It shows students evacuating a classroom during an earthquake. One boy can be seen giving another boy -- who is wearing a leg cast -- a piggyback as they flee to safety.

The post's simplified Chinese caption translates in part as: "Three earthquakes happened in Taiwan within an hour. I was woken up by the earthquake during my lunch break. Quanzhou, Fujian strongly felt the Taiwan earthquake."

Text overlaid on the video states: "When the earthquake occurred, it demonstrated the closeness of these classmates in a life-or-death situation." 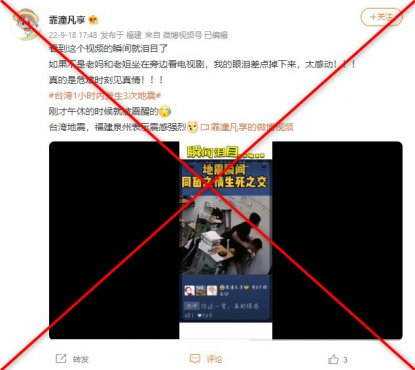 A screenshot taken on September 22, 2022 of the misleading post.

Rural and sparsely populated southeastern Taiwan was rattled by a series of jolts in September, AFP reported.

The most powerful, a 6.9-magnitude quake, struck on the afternoon of September 18, tearing up roads and bringing down a handful of houses in the town of Yuli where at least one person was killed.

Four others were rescued from a collapsed building, while authorities said 146 people suffered injuries.

Taiwan is regularly hit by quakes and most cause minimal damage but the island also has a long history of deadly disasters.

The same video was viewed more than 800,000 times in Twitter posts in India, Pakistan and the UK alongside a similar claim that it was filmed in Taiwan.

It was also shared here and here alongside a simplified Chinese caption that claims it was filmed during an earthquake in Sichuan in early September.

The text overlay on the video states that it was filmed in Ya'an, a city in Sichuan province in southwestern China.

"When the earthquake hit Ya'an, Sichuan, the first thing in this boy's mind is his injured classmate," the video's simplified-Chinese title reads.

Below is a screenshot comparison of the video in one of the false posts (left) and the video from Elephant News (right) with the two students circled in green by AFP: 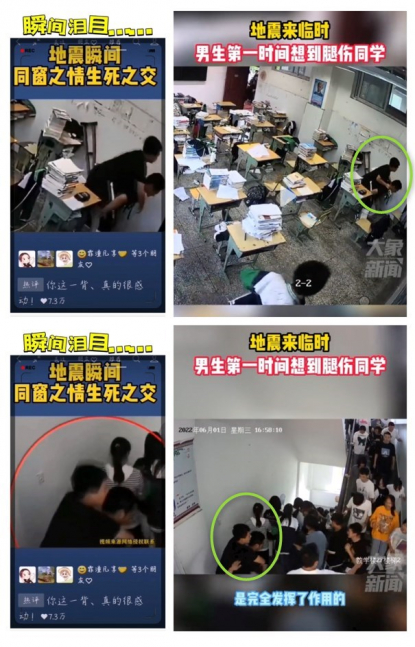 "Can't leave a classmate behind because he has a leg injury. The teacher was commanding the evacuation from the stairwell." 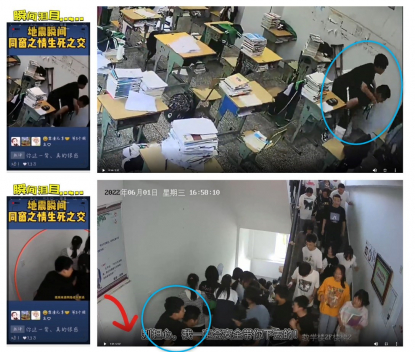 A screenshot comparison of the video in the misleading post (left) and the video published by the school on WeChat with the two students circled in blue by AFP.

The school also posted a photo of the student, praising him for "evacuating to a safe location while carrying a student who had suffered leg injuries".

Local news outlet Changjiang Daily also published the same video on June 2 in a report about the earthquake in Sichuan.

At least four people died and 14 others were injured after two earthquakes hit southwestern China on June 1, state media reported.

AFP has previously debunked other misinformation about the same earthquakes in Taiwan here and here.