After a series of earthquakes rattled Taiwan's sparsely populated southeastern region in September, photos of toppled buildings were shared thousands of times on Facebook alongside the claim they show the aftermath the tremors. But the photos have been shared in a misleading context. Whilst an earthquake in Taiwan on September 18, 2022 tore up roads and brought down a handful of houses, the photos in the posts actually show past earthquakes on the island in 1999, 2016 and 2018.

The Tagalog-language post says the disaster-prone Philippines is lucky to have dodged an earthquake as well as Typhoon Nanmadol -- incorrectly referred to as "Tromadol" -- which slammed into Japan around the same weekend.

The caption reads, in part: "As more than two million people were asked to evacuate in Japan due to approaching super typhoon Tromadol [sic], parts of Taiwan have already been destroyed by yesterday's earthquake." 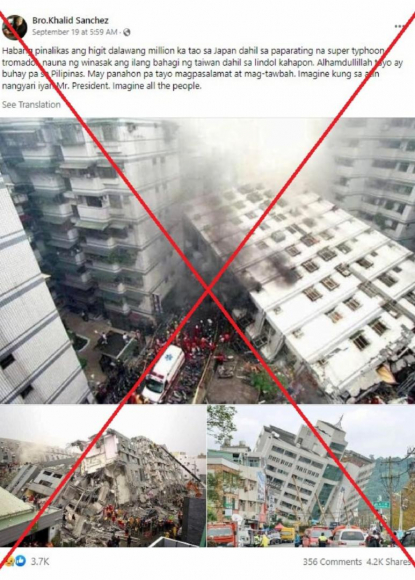 Earthquake-prone Taiwan's rural and sparsely populated southeastern region has been rattled by a series of jolts in September.

The most powerful -- a 6.9-magnitude quake -- struck on the afternoon of September 18.

The quake tore up roads and brought down a handful of houses in the town of Yuli where at least one person was killed.

Four others were rescued from a collapsed building, while authorities said a total of 146 suffered injuries.

Some of the photos were also shared alongside a similar claim in posts here and here from the Philippines, and here from Thailand.

Reverse image searches, however, found the photos were taken from past earthquakes in Taiwan.

The first photo was published here by Taiwan's English-language newspaper Taipei Times with the caption: "The collapsed Doctors' Home complex in then-Taipei county's Sinjhuang District is pictured after the 921 Earthquake on Sept. 21, 1999."

In September 1999, a 7.6-magnitude quake killed around 2,400 people in the deadliest natural disaster in the island's history.

Below is a screenshot comparison between the 921 earthquake photo shared in the misleading post (left) and the image published by Taipei Times (right):

The Chinese-language Taiwanese newspaper Liberty Times also included the photo alongside its report ahead of the anniversary of the 921 earthquake, on September 19, 2021.

The report about the reconstruction of buildings in New Taipei City damaged during the quake also notes the collapse of the Doctors' Home complex had caused structural damage to surrounding premises.

The second photo was shot by photographer Ashley Pon for Getty Images.

Its original caption states: "Rescue personnel search for survivors at the site of a collapsed building on February 6, 2016 in Tainan, Taiwan.

Below is a screenshot comparison between the Tainan earthquake photo shared in the misleading post (left) and the original image (right):

Finally, the third photo was taken by AFP journalist Paul Yang and can be seen here.

Its caption reads: "Rescue and emergency workers block off a street where a building came off its foundation, the morning after a 6.4 magnitude quake hit the eastern Taiwanese city of Hualien, on February 7, 2018.

"Rescue workers scrambled to search for survivors in buildings left tilting precariously on their foundations in the Taiwanese city of Hualien on February 7, after an overnight earthquake killed four and injured more than 200."

Below is a screenshot comparison between the Hualien quake photo shared in the misleading post (left) and the original image (right):

A different photo of the same tower block in Hualien has also been falsely shared following the September 2022 quakes, debunked by AFP here.