A picture was shared thousands of times in posts claiming it shows a portrait of Indian Prime Minister Narendra Modi displayed at the home of a family that opposition politician Arvind Kejriwal visited while campaigning in Gujarat in September 2022. Posts mocked Kejriwal for visiting people who apparently backed his rival. However, the image has been doctored. The portrait actually showed a different person, not Modi.

"The people Kejriwal visited turned out to be fans of Narendra Modi. They made a fool out of Kejriwal," reads a Hindi-language tweet posted on September 12.

The picture shows a group of people including Arvind Kejriwal, Delhi's chief minister and head of the Aam Aadmi Party (AAP), which is a rival to Prime Minister Narendra Modi's ruling Bharatiya Janata Party (BJP).

Kejriwal visited the home of an auto rickshaw driver on the campaign trail in Gujarat, where he is vying to knock out the BJP's Bhupendrabhai Patel as chief minister in December elections and install an AAP candidate.

They appear to be standing next to a wall featuring various portraits, including one of Modi.

The post, which attracted more than 2,000 retweets, was shared by Wasim R Khan, president of the BJP's Mumbai Minority Morcha. 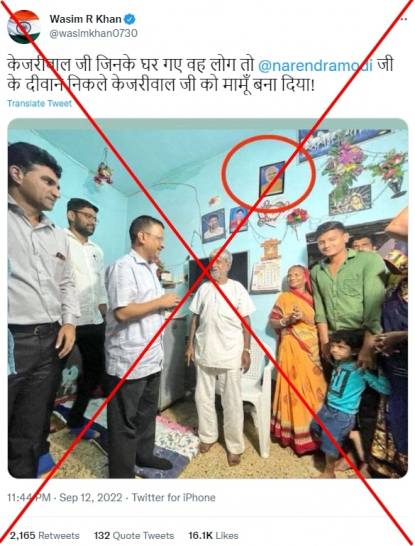 Many comments appeared to believe the image showed a genuine photo.

"This dog is a traitor. He shouldn't even ask for water," read one comment.

"This picture proves that Modi resides in the heart of Gujaratis. Even if he (Kejriwal) keeps sweeping," another said, apparently referring to the AAP's symbol, which is a broom.

However, the image has been altered.

Kejriwal's tweet, posted on September 12, read in Hindi: "In Ahmedabad, auto driver Vikrambhai Dantani lovingly took me home for dinner, introduced me to the whole family and offered me delicious food with great respect".

"Heartfelt thanks to Vikrambhai and all the auto driver brothers of Gujarat for this immense affection."

The photo in the tweet shows a different picture on the wall.