A video has been viewed tens of thousands of times in social media posts alongside a claim it shows Britain's Queen Elizabeth II throwing food to poor children. This is false. The video is actually a clip from a short film by the Lumière brothers filmed in Vietnam. It was first released in 1901, years before the birth of the late queen.

It shows two women -- dressed in white dresses and hats -- throwing small objects towards a group of children who then scramble to collect them off the ground.

The post's Bengali-language caption translates to English in part as: "No one returned with empty hands from the court of Queen Elizabeth. She's giving food to the poor." 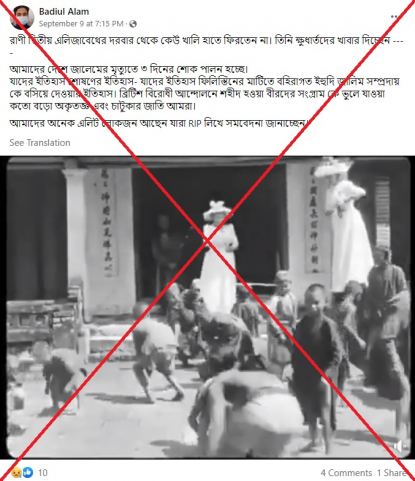 The post goes on to say that Bangladesh, a former British colony and a member of the Commonwealth, has announced three days of mourning for "the death of an oppressor".

"What an ungrateful and flattering nation we are to forget the struggle of the heroes who died in the anti-British movement," it reads.

Queen Elizabeth II, the longest-serving monarch in British history and an icon instantly recognisable to billions of people around the world, died on September 8 aged 96.

The same clip was viewed tens of thousands of times after it was shared on Facebook in English-language posts in Africa here and here. It was also shared in similar Spanish and Arabic-language posts.

A reverse image search of the clip's keyframes found a longer version of the video posted on Wikimedia Commons on October 24, 2015.

According to the video's description, it shows part of a film by the Lumière brothers.

The film's French-language title translates as "Annamite children collecting coins in front of the Lang Temple".

Below is a screenshot of the video in the misleading post (left) and the video on Wikimedia Commons (right):

A spokesperson for the Institut Lumière, a Lyon-based film organisation that honours the work of the Lumière brothers, told AFP that the footage was taken from their movie "Annamite children collecting coins in front of the Lang Temple".

The film, directed by Gabriel Veyre, was filmed between 1899 and 1900 in an area of "French Indochina" that has since become part of Vietnam, the spokesperson said.

"The two women in front of the Láng Temple are the wife and daughter of the governor-general of Indochina," the spokesperson said. "[Queen] Elizabeth II was born 25 years later, so hardly could have appeared in the film."

The spokesperson added: "The woman [in the film] is not throwing food, but ancient coins called qian, which were used in China and Indochina and had little value. A hole in the middle made it possible to carry them with string."

A clearer screenshot from the same film was published here on a French-language website that catalogues the Lumière brothers' films.