Data shows Lagos is not Africa’s third-biggest economy, as claimed by officials of Nigerian ruling party

Officials of Nigeria’s ruling All Progressives Congress (APC) have alleged that Lagos State is the third-largest economy in Africa. The claim spread after an influential ex-governor of the state, Bola Ahmed Tinubu, was nominated as the APC’s candidate for the presidential election set for February 2023. His running mate, Kashim Shettima, made the same assertion at a recent lawyers’ conference. But AFP Fact Check found this to be false: official data shows that, though the state is Nigeria’s biggest economy, it is not among the top five economies on the continent.

Formerly the seat of the government, Lagos is Nigeria’s economic capital. It tops the list of the best African cities for tech startups and is home to Nigeria’s busiest seaport and the country offices of tech giants like Google and Microsoft.

“Lagos is the third largest economy in Africa,” Shettima said at the annual general meeting of the Nigerian Bar Association in Lagos on August 22, 2022.

He made the comments while listing Tinubu’s achievements when he was state governor between 1999 and 2007.

Festus Keyamo, the spokesman for Tinubu’s election campaign and Nigeria’s junior minister for labour and employment, made the same claimduring an interview with Nigerian broadcaster Arise TV in early August.

Lagos state is Nigeria’s biggest economy and was responsible for 15.3 percent of the country’s gross domestic product (GDP) in 2021.

Figures from the National Bureau of Statistics (NBS) showed that the state had the highest internally generated revenue (IGR) in 2020, with 419 billion naira (US$1.1 billion at the time) collected in taxes and dues. That amount is more than triple the revenue of the second-best state, Rivers, which collected 118 billion naira during the same period.

Tinubu is credited with changing the way taxes and levies are collected in the state, which has seen its IGR steadily increase.

But the claim that the state has the third largest economy in Africa is false.

AFP Fact Check searched the website of the state’s ministry of economic planning and budget and found a document that shows the GDP figures of the state between 2013 and 2021.

The report was issued by the Macro Economic Statistics Division of the Lagos Bureau of Statistics (LBS).

The agency confirmed to AFP Fact Check that the document was authentic and could have only been published on the website after the approval of the commissioner in charge of the ministry.

That figure represents about 15.3 percent of Nigeria’s GDP, which stood at 173.527 trillion naira during the same period.

In terms of percentage contribution to the national GDP, the 2021 figure was the lowest contributed by the state over a five-year period between 2017 and 2021. The document cited the COVID-19 pandemic as a key reason for the decline. 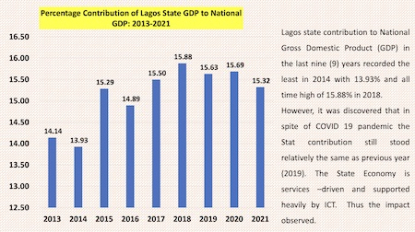 A screenshot of the Lagos State GDP report, taken August 28, 2022

World Bank data shows Lagos State is not Africa’s third-largest economy - whether it is subtracted from or counted as part of Nigeria's national gross domestic product.

According to the report, the country's GDP was the largest on the continent in 2021 at US$440 billion.

The value of Lagos State for the same year was US$75.965 billion.

This places it behind the economies of five countries in sub-Saharan Africa (Nigeria, South Africa, Ethiopia, Kenya and Ghana) and three in North Africa (Egypt, Algeria and Morocco).

If Lagos State were to be deducted from the national value, Nigeria would simply slump to the third position in Africa behind South Africa and Egypt.