As tensions between India and China mounted over their disputed Himalayan border, a video was viewed hundreds of thousands of times in posts claiming it showed Indian soldiers celebrating after China "ceded" a contested lake there. However, the footage actually shows troops taking part in an event for the 75th anniversary of India's independence. AFP found no official reports that China handed over the Pangong Tso lake to India, as of August 22.

The tweet shows a video, which has more than 290,000 views, of soldiers hoisting the Indian national flag and marching along a lake. 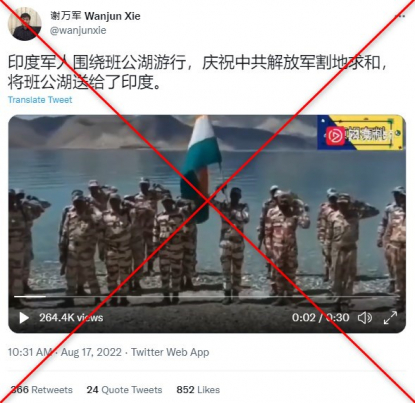 A screenshot of a tweet sharing the false claim, taken on August 19, 2022

Pangong Tso lake lies in the disputed territory along the border between China and India, where the neighbours have engaged in a string of deadly skirmishes in recent years.

In June 2020, Indian and Chinese troops fought a hand-to-hand battle in the contested Ladakh region that left at least 20 Indians and an unspecified number of Chinese forces dead.

The increased tensions caused a nosedive in relations between the world's two most populous countries.

While the two nations pulled back troops from the region in August 2021, tensions remain high, fuelled by reports of China building bridges across the Pangong Tso Lake -- a move that India branded illegal -- and a joint US-India military exercise planned in the mountainous region.

India and China, who fought a full-scale border war in 1962, have long accused each other of trying to take territory along their unofficial border known as the Line of Actual Control (LAC).

The video was widely shared on Twitter, including here and here, in posts claiming it showed Indian soldiers celebrating China "ceding" the lake.

"And they [Chinese Communist Party] dare attack Taiwan like this?" another wrote.

However, the video is circulating in a false context.

A reverse image search on Google found the video in a tweet from India's ANI news agency on August 15 about Indian border force troops marking the 75th anniversary of India's independence.

The tweet reads: "#WATCH | ITBP jawans celebrate #IndependenceDay at the banks of Pangong Tso in Ladakh".

The soldiers in the video are chanting "Bharat Mata Ki Jai,  ITBP Ki Jai", which translates as "Hail Mother India, Hail the ITBP".

Below is a screenshot comparison of the video shared in a false context (left) and in ANI's tweet (right): 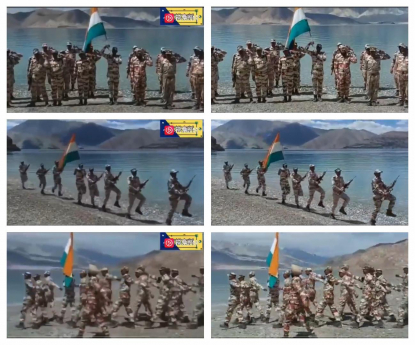 The ITBP also shared the footage on Twitter, saying it showed soldiers "celebrating the Independence Day at the banks of Pangong Tso, Ladakh."

ITBP soldiers took part in similar marches around the country, climbing 75 peaks along the Indian border on August 15 to mark independence from Britain in 1947.

The government launched a campaign encouraging Indians to hoist the national flag or display it in their homes between August 13 and 15.

AFP found no official reports about China "ceding" Pangong Tso lake to India, as of August 22.