Posts promoting a "detox foot pad" have been viewed hundreds of thousands of times in Facebook posts in the Philippines alongside a claim they can be used to fight various medical conditions including tumours and cancer. This is false; doctors told AFP there's no evidence the product can pull toxins out of the body to help treat these diseases. The Philippine Food and Drug Administration has advised against buying the pads, which it has not evaluated as being safe.

Two images of the "Kinoki Cleansing Detox Foot Pads" were posted on Facebook on August 2, 2022.

The post's first photo appears to show a foot pad that has been applied to the bottom of someone's foot with packaging for Kinoki foot pads in the background.

The second image is a collage of several pictures. It shows a foot pad that has been partially peeled off; a stock image of acupuncture point locations on the feet; and product shots of the Kinoki foot pads.

The post's Tagalog-language caption claims that the product can help with various medical conditions, including "muscle and joint pains", "diarrhoea", "arthritis" and "tumour cysts".

It also claims that the foot pads can help "to remove toxins or dirt inside the body" and "fight cancer".

"Detox overnight in order to have good health", the caption adds. 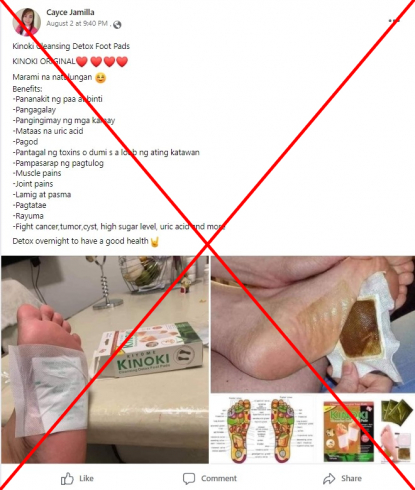 Posts promoting the product and claiming it could fight various medical conditions were viewed hundreds of thousands of times on Facebook here, here and here.

However, health experts told AFP that the claims made in these posts are false.

'No evidence' of safety, efficacy

The FDA said the pads had not undergone the administration's evaluation process for quality and safety.

It told AFP that the product was still not registered as of August 11.

Dr Meredith Garcia-Trinidad, an oncologist at the Dagupan Doctors Villaflor Memorial Hospital, told AFP: "There are no clinical trials or other scientific studies...that detox foot pads work to draw out toxins or other harmful chemicals from the body in order to prevent or cure any illnesses -- including cancer -- or that they are safe.

"In fact, any detoxifying products for that matter are bogus and unnecessary as the body has natural mechanisms to get rid of its waste products", she said.

"There is no scientific basis for those foot pads," he told AFP. "There is no evidence that these work for those ailments -- [they] will not work on tumours", he said.

Gancia explained that pads such as these usually contain ginger, which has an anti-inflammatory effect and could sometimes help to alleviate pain.

"But this effect is not exclusive to foot pads; it's similar to using creams and oils that warm the skin", he added.

Foot pads will also change colour after being exposed to heat and sweat, Gancia said.

"These are not toxins that are pulled out of the body", he said.

A study involving 53 individuals published in the Journal of Heavy Metal Toxicity and Diseases in 2018 concluded there was no evidence that "detox foot pads" can eliminate toxic metals from the body through the feet.

"On the opposite side…the use of Detox Foot Pad may release minute quantities of metals into the body during overnight Detox Foot Pad sessions", the study said.

In 2010, a United States federal judge banned marketers of Kinoki "Detox" Foot Pads from selling the product in the country, after the Federal Trade Commission (FTC) found its claims of relieving different ailments "deceptive".