A video has been viewed millions of times in Facebook and Twitter posts that claim it shows Indian sprinter Hima Das winning a gold medal at the 2022 Commonwealth Games in Birmingham, England. However, the claim is false; while Das competed in the Games, she did not secure any medals. The video is from 2018, when she won gold in the women's 400m race at the World Athletics U20 Championships in Tampere, Finland.

The video, which has more than 1.9 million views, shows Das winning a 400m women’s track event. 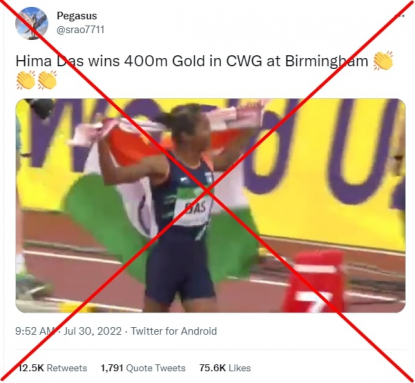 The 2022 Commonwealth Games kicked off in Birmingham, England on July 28.

After 11 days of sporting action, Australia finished top of the medals table with 67 golds, ahead of England and Canada. India achieved fourth place with 22 golds.

The same video garnered more than 200,000 views in similar posts on Twitter and on Facebook here and here.

A yellow banner with the words "IAFF World U20 Championships TAMPERE 2018" can be seen from the 0:33 mark of the clip.

The clip was posted on the YouTube channel of World Athletics on August 13, 2021.

Below are screenshot comparisons of the video shared in false post (left) and the World Athletics video (right): 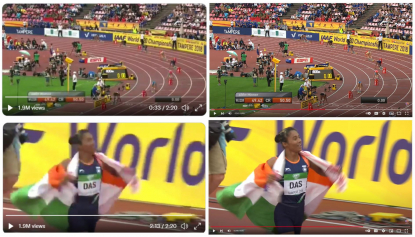 "With a power-packed finish, India’s Hima Das sealed her nation’s first ever medal in the 400m at the IAAF World U20 Championships," reads an article on the sprinter's win on the website of World Athletics, which was formerly known as the International Association of Athletics Federations (IAFF).

World Athletics tweeted a clip of the race on July 13, 2018, which shows several identical scenes from the video shared in false posts in 2022.

Das also posted footage from the event on her Facebook page on the anniversary of her victory in 2019 and 2020.

In both posts, she made a reference to the World U20 Athletics Championships in 2018.

While Das competed for India in the 200m and 4x100m relay events at the 2022 Commonwealth Games, she did not secure any medals.