Korean-language social media posts have repeatedly shared an image that appears to show former South Korean prime minister Hwang Kyo-ahn holding a sign that says former president Moon Jae-in could face jail time and execution. The image, however, has been doctored to add the message. The original image shows Hwang holding a sign that says Moon's party won the 2020 general election because of voter fraud -- a claim that South Korea's Supreme Court subsequently said was baseless.

The doctored image was shared on Facebook on August 3.

It appears to show Hwang holding up a sign with Korean-language text that translates as: "When there is a change in government, Moon Jae-in and his gang will all go to prison. At most, they may be executed. I am warning you. The people know all that you have done."

"Brave Chairman Hwang kyo-ahn conducting a one-man protest under the chilling gaze of the Moon administration," states the post's caption. 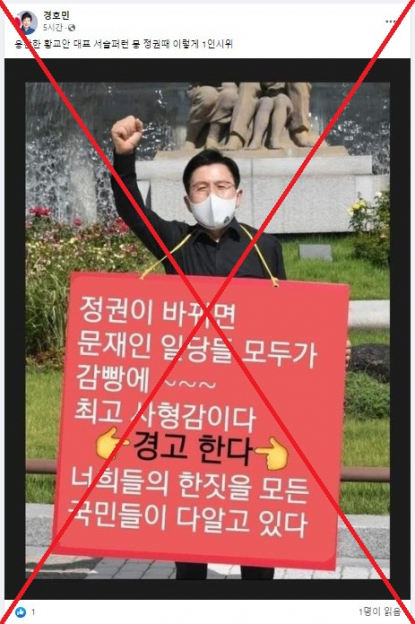 Screenshot of the misleading claim shared on Facebook. Captured August 3, 2022.

The claim appears to suggest the photo was taken during Moon's presidential term, which ended in May 2022.

The doctored image was also shared on Facebook here, here and here.

Comments on the posts indicate some users believed the sign was genuine.

One user wrote: "Chairman Hwang Kyo-ahn is brave. He may be targeted in an assassination disguised as suicide. He should hire private bodyguards."

Another commented: "He cannot fight alone. After the conservatives take back the government, the country will stand by him."

Hwang was South Korea's prime minister from June 2015 to May 2017 and acted as the country's interim leader after former President Park Geun-hye was impeached in December 2016, AFP reported.

He later went on to head the country's then-opposition United Future Party -- a predecessor to the now ruling People Power Party -- from February 2019 to April 2020, when he resigned after his party suffered a crushing defeat in the 2020 general election on April 15.

A reverse image search on Google found the image was doctored from a photo published by Newsis, a South Korean news organisation, on August 18, 2021.

The photo published by Newsis shows Hwang holding a sign that reads, "Open a special counsel investigation on the [role of the] Cheongju spy organisation in electoral fraud!"

The text on the sign in the misleading posts was digitally altered and replaced with a threatening message directed at Moon.

Below is a screenshot comparison of the doctored image (left) and the original photo published by Newsis (right): 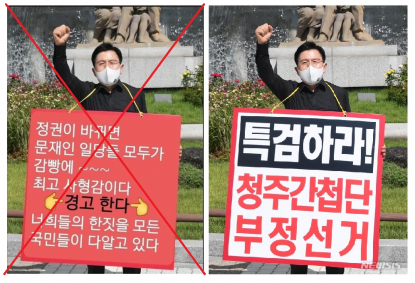 The "Cheongju spy organisation" mentioned on the sign refers to four people detained for espionage in South Korea in July 2021 under the country's National Security Act, according to local reports on Hwang's protest here and here.

The group has been accused of staging protests against the deployment of Lockheed F-35 jets to South Korea under the orders of the North Korean regime, though their trial has yet to be concluded, a local media organisation reported in June 2022.

Corresponding photos of Hwang holding the sign at the protest were also published in South Korean news reports here and here.

Since his resignation as party chairman, Hwang has repeatedly made claims that the 2020 general election was fraudulent, as seen in reports here and here.

After announcing his candidacy in the country's 2022 presidential election on March 10, Hwang held a press conference to level the claim that the Cheongju group systematically intervened in the 2020 general election to favour Moon's then-ruling Democratic Party, on the orders of North Korea.

South Korea's Supreme Court on July 28, 2022, dismissed a former lawmaker's suit to have the results of the 2020 general election annulled based on various allegations of fraud.

The court found no evidence to support claims that votes had been tampered with, adding that the plaintiff "failed to meet the burden of proof necessary for an electoral suit, by presenting allegations without clearly proving which party committed the alleged fraud that would warrant annulment of the election results."