Days before US House Speaker Nancy Pelosi's historic visit to Taiwan, a video was viewed hundreds of thousands of times in online posts that claimed it shows a military exercise in eastern China. Although China did announce plans to stage military drills in waters around the self-ruled island in response to Pelosi's visit, the footage has been shared in a false context. It actually shows a Taiwanese military drill in November 2020.

The one-minute 54-second video was shared on Twitter on July 30 alongside a claim that it shows Chinese military drills on eastern China's Pingtan island.

The footage shows ammunition being fired into the night sky over a body of water. A man can also be heard in the background saying in Mandarin, "Look, live fire drills."

The tweet's caption reads in a combination of English and simplified Chinese: "Tension at Taiwan Straits, as #Pelosi departed for #pelositaiwan.

"Pelosi travels to Asia, Pingtan is doing a live-fire drill."

The footage -- which has been viewed more than 36,000 times -- circulated online days before Pelosi, second in line to the US presidency, landed in Taiwan's capital Taipei.

The 82-year-old lawmaker is the highest-profile elected US official to visit the self-ruled island in 25 years and Beijing has made clear that it regards her presence as a major provocation, setting the region on edge, AFP reported.

China announced it would hold live-fire military drills off the island of Pingtan in Fujian province on July 30 -- the same day the misleading post was published. 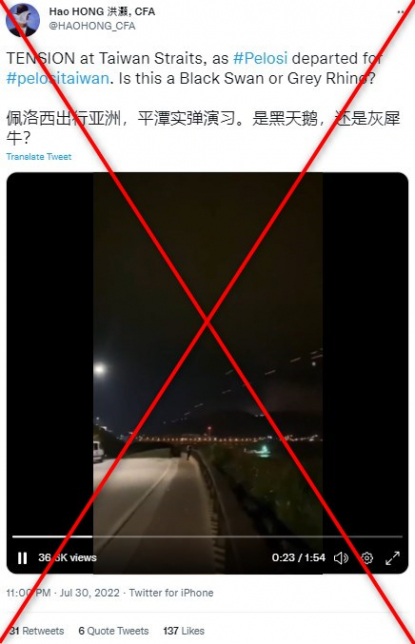 The footage has also been viewed hundreds of thousands of times in other posts on Twitter, Facebook, and Gettr in both Chinese and English alongside a similar claim.

Indian news outlet Firstpost also posted the second part of the clip on its website on July 31, repeating the claim in a report.

Although China announced it would stage a series of live-fire military exercises in waters around Taiwan after Pelosi departed the island, the footage actually dates back to a Taiwanese military exercise in the Matsu Islands in 2020.

The Matsu Islands are located some 200 kilometres (124 miles) northwest of Taiwan and less than 10 kilometres (six miles) from the Chinese mainland. They are among the few islands close to the mainland's shores that remain under Taiwanese control.

A combination of reverse image and keyword searches on Baidu found the footage was made up of two separate clips.

Both clips were published in a news report by China's state-run Haike News on November 13, 2020.

"Matsu locals recently captured images of a Taiwanese army exercise using live ammunition," the post's caption and video subtitles read in part. "Many locals in the area were drawn to this scene and stopped to observe and take pictures."

Below is a screenshot comparison of the videos in the misleading posts (left) and the Haike News report (right): 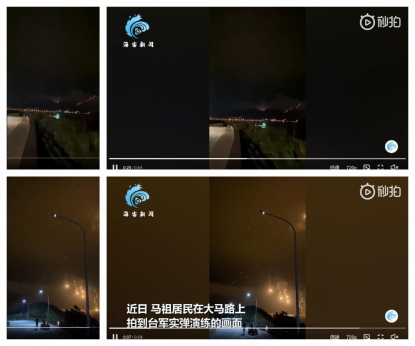 A screenshot comparison of the video in the misleading post (left) and the Haike News report (right).

Local media outlet Matsu News also reported that drills were staged on the evening of November 6, 2020 to mark the start of a local marathon.

"Commander Zhang Yuan-xun says the exercise is held to coincide with the start of the marathon," the reports says. "The drills will show fellow countrymen the capability to defend the front-line that is in Matsu."

A commemorative plaque visible in the Matsu News report indicates the drill was held near the Zhenge Daidan Memorial Park.

Below is a comparison of the plaque as seen in the video (left) and in a screenshot of the same location on Google Maps (right):

The commemorative plaque as seen in the Matsu News report and a screengrab from Google Maps.

The same footage was geolocated to Matsu Island in a report by Taiwanese fact-check site MyGoPen.

The fact-check site found this YouTube video which shows the same location about 1.5 kilometres (0.9 miles) from the memorial park on Matsu Island.

Below is a screenshot comparison of the footage in the misleading posts (left) and the YouTube video (right) which shows corresponding features: 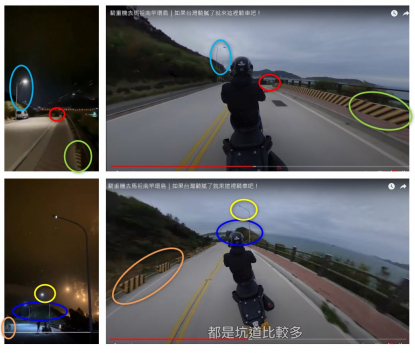 Comparison of scenes from the misleading video and a video tour of Matsu.

In response to an inquiry from AFP about the misleading posts, Taiwan's Military News Agency -- affiliated with Taiwan's military -- shared a report by Taiwanese fact-check site MyGoPen that concluded the video shows Taiwanese military drills in 2020.