A video showing a floral tribute has been viewed hundreds of thousands of times on social media alongside a claim it was filmed in July 2022 to honour the victims of last year's catastrophic flooding in China's Henan province. Whilst there were recent reports of floral tributes in Henan to commemorate one year since the floods, the video has been shared in a misleading context. The clip previously circulated online in posts from July 2021 about a tribute to those who died after torrential rains flooded a subway in Henan's capital Zhengzhou.

The simplified Chinese tweet translates as: "Flowers were placed today at Shakou Road Station of Zhengzhou Metro Line 5 to commemorate the torrential rain on July 20."

It was shared a year after 14 people died in a flooded subway in Zhengzhou, the capital of central China’s Henan province.

Catastrophic flooding caused by heavy rains in Henan in the summer of 2021 killed 398 people. 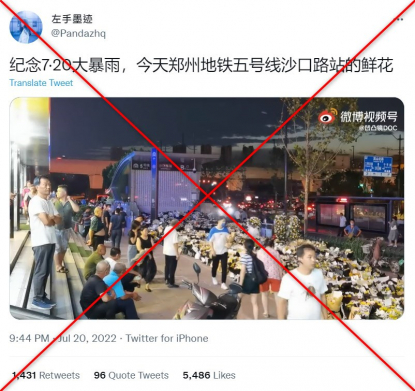 A screenshot of the misleading post, captured on July 26, 2022

The clip was also embedded in a news report by broadcaster New Tang Dynasty Television on July 20, 2022.

Comments on the posts suggest some social media users believed the clip showed a floral tribute in 2022.

One commented: "This time no one is blocking them."

Another wrote: "What about last year's initiative to quash BBC journalists? Why is there now a malicious commemoration?"

Reports published by the BBC and Hong Kong news organisation HK01 on July 21, 2022 state some people left flowers in the Zhengzhou subway to commemorate those who died there.

The clip of the floral tribute, however, has been shared in a misleading context.

A keyword search of the username watermarked in the top-right corner of the video led to a video posted on Weibo on July 21, 2021.

The Weibo video is geotagged at the Shakou Lu station in Zhengzhou.

Below is a screenshot comparison of the video in one of the misleading posts (left) and the Weibo video (right): 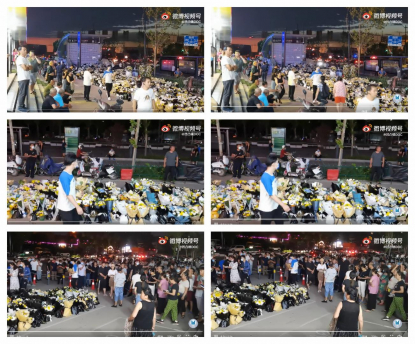 A reverse image search on Google found a similar video published in a news report by the Epoch Times on July 28, 2021.

The report states in part: "Residents and families of victims of the Henan Zhengzhou flood gathered on July 27 -- the seventh day after the victims' deaths -- to lay flowers and pay their respects outside the Zhengzhou line 5 metro station but were prevented from doing so [by security personnel], and the two sides clashed."

According to Chinese tradition, the seventh day after death marks the height of the mourning period.

AFP reported on the floral tribute in July 2021 here.

AFP's report states in part: "The death toll from floods in central China's Henan province rose to 71 on Tuesday as a tribute at a subway where 14 people died was sealed off in a sign of sensitivity to public criticism of the government's handling of the disaster.

"Subway guards eventually blocked access to the floral tribute, but a video published by state-run West China Metropolis Daily Tuesday showed a group of people pushing aside the yellow barricades on Monday night chanting "let the spirits of those who died come back home!"