A video of Pakistan Prime Minister Shehbaz Sharif has been viewed more than five million times on Facebook in July 2022 alongside the false claim that he resigned and called fresh elections. The posts circulated online after Sharif's party was defeated in by-elections in Punjab, the country's most populous province. But as of July 21, Sharif has not resigned. The video is actually from May 2022, when Sharif addressed the nation after becoming prime minister.

The Urdu-language caption to the video translates as: "Shehbaz Sharif announced a new election date and his resignation today. Congratulations to the nation."

The video shows Sharif lashing out at former prime minister Imran Khan, who was ousted following a no-confidence vote in April.

"You made an agreement with the IMF (International Monetary Fund), we did not do it," Sharif says, as he blames Khan for accepting certain loan conditions from the IMF. 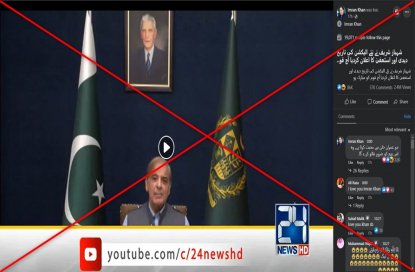 Nowhere in the video does Sharif, who leads the centrist Pakistan Muslim League-N (PML-N), announce his resignation or call fresh elections.

The clip was shared one day after by-elections were held in Punjab in which Khan's opposition party Pakistani Tehreek-e-Insaf (PTI) won 15 out of 20 seats, AFP reported.

The vote was also seen as a bellwether for national elections that must be held by October next year, although Khan has campaigned across the country for an earlier poll since being dismissed.

The same video was shared alongside a similar claim here, here and here on Facebook.

A keyword search found the video was originally broadcast by state media PTV News here on May 27, 2022.

Below is a screenshot comparison of the video in the misleading posts (left) and on YouTube (right):

is a screenshot comparison of the video in the misleading posts (left) and on YouTube (right): ( AFP)

The video in the misleading posts corresponds to the original video from its four-minute 14-second mark to its 14-minute 42-second mark.

The clip shows the first address to the nation by Sharif after assuming the premiership on April 11, 2022.

Pakistani television channel Geo News and newspaper Business Recorder reported on the address in May.

As of July 21, 2022, Sharif was still prime minister and his office's website still stated he was the country's leader.