Three photos of a man have been shared hundreds of times on social media alongside a claim they show the suspect in the assassination of former Japanese prime minister Shinzo Abe. The claim was also shared in a video by a Greek TV channel and viewed hundreds of thousands of times before it was removed from YouTube. In fact, the photos show 58-year-old Japanese video game designer Hideo Kojima, creator of the Metal Gear series. In a statement on Twitter, Kojima's company warned it may take legal action "in some cases" against those sharing the misinformation. Police have named the murder suspect as 41-year-old Tetsuya Yamagami, who was in custody as of July 13, 2022.

"The killer who attacked Abe is Tetsuya Yamagami, a 41-year-old communist believer," reads the claim shared in a simplified Chinese-language post here on Facebook on July 9, 2022.

It was shared alongside three photos of the same man.

In the first image, he is pictured wearing a furry hat; in the second he is seen posing in front of a portrait of the Argentine communist revolutionary Che Guevara; in the final photo he is wearing a T-shirt displaying comic book villain The Joker and carrying a tote bag featuring Guevara. 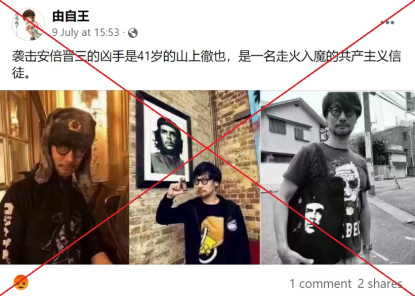 The claim began to circulate online after Shinzo Abe, Japan's longest-serving prime minister who stepped down in 2020 for health reasons, was shot dead on July 8 while campaigning in Nara region ahead of the upper house election.

Japanese police on the same day named the suspected killer as unemployed 41-year-old Tetsuya Yamagami, who told officers he had used a handmade gun.

Greek news outlet ANT1 shared the misinformation on its YouTube channel but subsequently removed it.

It was also shared by French politician Damien Rieu, who later deleted his tweet and issued an apology, saying he was "wrong not to check before sharing".

A combined reverse image and keyword searches on Google found identical photos published on Twitter here in 2017 as well as here and here in 2019 by Twitter user @Kaizerkunkun.

The user's account identifies itself as a personal assistant for Kojima, and is followed by both verified Twitter accounts of Kojima and his game development studio Kojima Productions.

Below are screenshot comparisons of the three photos shared in the misleading posts (left) and the photos uploaded by the user who identified themselves as Kojima's assistant (right): 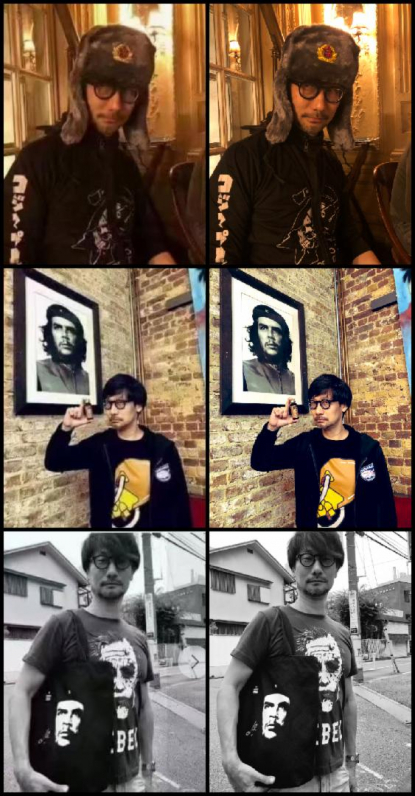 A Getty Images photo of Kojima published here and another image of him copyrighted to dpa Picture Alliance seen here correspond with the man pictured in the misleading posts.

Below are screenshot comparisons of the photos shared in the misleading posts (left) and the media photos (right): As the false claim spread widely online, Kojima Productions issued a statement on July 9 warning it would take legal action "in some cases".

"#KojimaProductions strongly condemns the spread of fake news and rumors that convey false information. We do not tolerate such libel and will consider taking legal action in some cases," the statement reads.

The misinformation appears to have originated on 4chan, an anonymous English-language imageboard website, Vice magazine reported.

A screenshot of the 4chan post was tweeted here, where the killer was incorrectly identified as 58-year-old Samyueru Hydeo from Tokyo.

The claim has since been debunked by multiple international media outlets, including The Washington Post, The Verge and CNET.