A video of a railway track being removed has been viewed hundreds of thousands of times after it circulated in posts that claim it shows Lithuania cutting off transit with a Russian exclave after the EU sanctioned certain goods in response to Russia's invasion of neighbouring Ukraine in 2022. Although Lithuania did follow the EU sanctions in blocking certain goods to Kaliningrad, the video has been shared in a false context. It was uploaded in a 2017 post about railway repairs in Estonia, years before Russia's invasion of Ukraine. Keyword searches found no official reports about Lithuania removing the railway track.

"Lithuania dismantled the railway track which leads to the Russian exclave Kaliningrad, and the degree of mechanisation is actually quite high," reads this Twitter post in simplified Chinese characters.

In the 28-second video, workers can be seen using specialist equipment to lift part of a railway track off the ground and place it onto a vehicle.

The Chinese-language text superimposed on the video translates as: "Lithuania runs counter to Russia.

"The European Union is still discussing how to allow Russia's sanctioned freight to pass through the country in a limited number, while Lithuania is unhappy and begins to dismantle the railway to Kaliningrad, the Russian exclave." 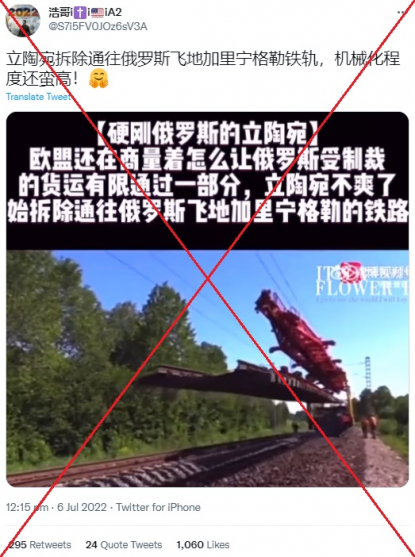 Kaliningrad, situated on the Baltic Sea, about a thousand kilometres (620 miles) from Moscow, is a highly strategic Russian military outpost in Europe.

The EU has so far adopted six sanction packages against Russia, including a ban on most Russian oil imports approved in early June 2022.

On July 13, 2022, the EU said that Lithuania had an obligation to allow the passage of sanctioned goods, with the exception of weapons, between Russia and Kaliningrad.

The video was also viewed more than 500,000 times such as here, here and here on Weibo, and here on Twitter.

However, the video predates Russia's invasion of Ukraine and the subsequent EU sanctions by several years.

A combined reverse image and keyword searches found a longer version of the video uploaded by an Estonia-based train video channel on YouTube here on October 26, 2017.

The scenes shared in the misleading post can be seen from the video's three-minute 57-second mark.

Below are two screenshot comparisons of the video in the misleading post (left) and the genuine YouTube video (right): 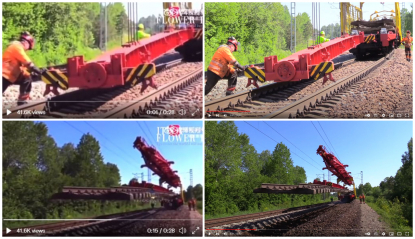 Contacted by AFP, Martin Kuusk, the person who operates the YouTube channel, confirmed that he filmed the video years ago in Estonia.

"The video was indeed filmed in Estonia in 2017 during track complete overhaul," Kuusk wrote in an email. "The video indeed shows track removal but as the video title shows, the removal is part 1 of 8. The following videos show laying of new track and following works."

This 42-minute video, uploaded to Kuusk's YouTube channel on October 19, 2017, shows the same footage of the track being removed as well as the process of laying new track.

Keyword searches found no official reports that Lithuania was removing its rail link with Kaliningrad following the EU sanctions on certain goods.