Skip to main content
A bank investment representative and a client sit near an electronic board displaying global indices price performance at a shopping mall in Bangkok on March 15, 2020. ( AFP / Romeo GACAD)

Multiple Facebook posts shared hundreds of times in early July 2022 claim the World Bank warned Thailand's economy was on the verge of collapse after being battered during the pandemic. This is false. The World Bank told AFP it had not issued such a warning and it predicted last month that the kingdom's economy would grow over the next three years as private consumption and tourism recovers. Independent economists said the country's economy is not currently at risk of bankruptcy despite challenges such as high inflation and debt. 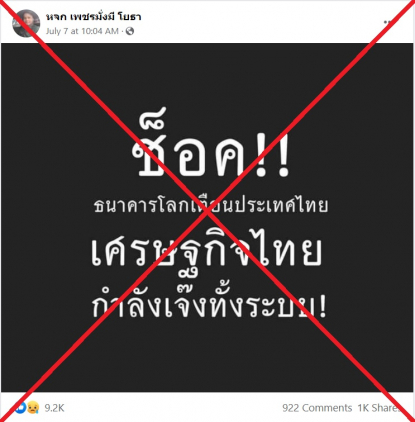 The same claim was shared on Facebook here, here, here and here.

Thailand's economy was badly battered during the pandemic and suffered its worst performance since the 1997 Asian financial crisis.

However, it rebounded and grew 2.2 percent in the first quarter of 2022 after Southeast Asia's second-largest economy relaxed its pandemic restrictions, a stark turnaround from a 6.1 percent contraction in 2020, AFP reported.

The World Bank told AFP that it had not issued the statement or warned of Thailand's imminent economic collapse.

Kanitha Kongrukgreatiyos, external affairs officer for the World Bank's Thailand office, said: "The claims shared in the misleading social media post did not come from the World Bank."

The kingdom's economy is expected to expand by 4.3 percent and 3.9 percent in 2023 and 2024 respectively, according to June 2022 projections released by the World Bank.

For the year 2022, the World Bank said Thailand's economy was expected to expand by 2.9 percent, buoyed by private consumption and tourism recovery.

Thailand's economic outlook does not point to collapse despite some existing risk factors, said Dr Somchai Jitsuchon, research director for inclusive development at the Thailand Development and Research Institute.

"There is no indication that this can happen in the near future. Sure there are risks, but not as severe as bankruptcy," he told AFP.

"The return of tourists to Thailand will help the baht rebound, which will also have a positive effect on the economy."

Somchai said factors such as high public and household debt, inflation and the Thai baht's value could present risks, but they were not presently severe enough for bankruptcy to be a concern.

Public debt -- currently at 60 percent -- would shrink after the economy expands and the Bank of Thailand had measures in place to mitigate and control inflation rates, which stood at the highest rate in 13 years, Somchai said.

"With the recovering economy, as Thailand moves out of [the pandemic], there are factors which indicate we are not dealing with a runaway-inflation phenomenon in Thailand," he said.

"Although household debt could spin out of control if interest rates and [public debt] increased, current projections did not indicate an "uncontrollable increase", Somchai said.

According to data from the country's central bank, Thailand's foreign currency reserves stood at US$221.8 billion as of July 1, 2022.

Foreign exchange reserves are assets held by a nation's central bank used to back liabilities and influence monetary policy.