An online article discounts the influence of climate change on wildfires by pointing to satellite data that shows the amount of land burned in such blazes has decreased despite rising CO2 emissions. This is misleading; the extent of land destroyed by wildfires has shrunk over the past few decades, but that is because large areas have been cleared for farming -- and scientists say the risk, intensity and severity of fires is rising in places where climate change is causing hotter, drier weather.

"New Data Absolutely Destroys Media Claims of 'Climate Change is Causing More Wildfire,'" says the headline of a June 14, 2022 articleposted on Facebook by Climate Realism, a website that says it provides "daily rebuttals to the alarmists' Climate Delusion."

The blog post was authored by Anthony Watts, a former television weatherman and senior fellow of the Heartland Institute, a US think tank that has denied the threat of climate change and has links to the fossil fuel and tobacco industries.

Other Facebook pages have also shared the article, which points to a United Nations report on the rising risk of wildfires as a source of what it calls false "politically based claims."

To support its claims, the blog post includes a graph of satellite data from the European Space Agency (ESA) showing no rise in the global area burned by wildfires from 1982 to 2018. The article then juxtaposes the graph with one using data from the US National Oceanic and Atmospheric Administration (NOAA) that shows rising CO2 emissions. 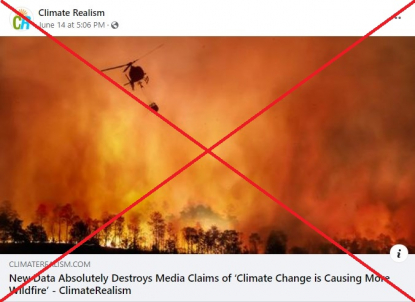 "Clearly, there is no correlation whatsoever between increasing atmospheric CO2 and global wildfire acreage burned," the article says.

The data it presents are authentic. However, a scientist from the ESA said the text focused on the wrong measure to assess the effect of climate change on wildfires.

"The author of the post is right that more warming does not necessarily imply more burned area and that global burned area is declining," said Clement Albergel, a climate applications specialist at the ESA's European Centre for Space Applications and Telecommunications (ECSAT). "The point is not how much total area is burned, but rather the intensity and severity of wildfires, as well as the extension of the fire season."

Albergel added in an email that, "when high temperatures are combined with low humidity, low rainfall and/or high winds," the risk of wildfires increases.

"This combination of conditions is now observed over longer periods of time over much of the world, including Europe, and is linked to climate change," he said. "Human-induced climate change increases the frequency and/or severity of periods with high fire risk."

Mark Parrington, a forest fire specialist at the EU satellite monitoring service Copernicus, said there is "a clear link between the fires we have been observing and increased flammability" caused by drier weather.

"One of the common denominators of the locations where we have been observing fire activity and emissions above the typical values over the last 20 years has been drier conditions and increased flammability," he said.

Numerous analyses have shown how clearing land for farming has contributed to a reduction in the geographical extent of wildfires. Watts cited in his blog post an article from PBS NewsHour that includes this explanation.

The global decrease in burned land "is caused by the change in savannas versus croplands in Africa, which is where the declining is more evident," according to Albergel.

"Satellites have detected a global decline in burned area of grassland, coincident with a small increase in burned forest area," he said, citing two studies. 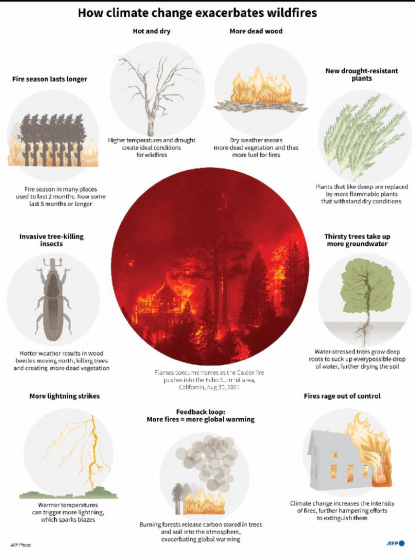 Clearing land for agriculture separates fire-prone areas of bush that serve as fuel.

"In savanna areas with sparse vegetation, fragmented connectivity between fuels inhibits fire spread which can limit fire size," says the UN Environment Programme (UNEP) report that is criticized in the blog post.

One 2008 study from nine scientists at US and European universities used sedimentary charcoal records to analyze wildfire trends over thousands of years. It noted that burned areas had decreased since 1870 -- despite rising temperatures and populations -- as people managed land for farming.

"In regions less dominated by intensive land management, wildland fire has remained at high levels or increased as the climate has warmed," the study says.

They estimate the intensity of fires -- the rate of energy released from the blaze -- by measuring the heat, amount of matter burned and speed of the fire, according to the UNEP report, which says wildfires are growing in intensity "across Earth's ecosystems."

Scientists also assess fire severity -- the impact on ecosystems -- by using the "composite burn index," which measures the ground effects of wildfires. US agencies map data on fire severity through the Monitoring Trends in Burn Severity project (MTBS), whose interactive maps indicate the number and intensity of fires have grown since 1984. Agencies such as Copernicus also use satellite readings to measure the heat intensity of fires and the amount of matter they emit.

A Copernicus analysis of wildfires in 2021 found several regions saw their highest estimated wildfire emissions on record. In Siberia, North America, the Mediterranean and North Africa, the fires' "persistence and intensity were remarkable," the report says.

The UN Intergovernmental Panel on Climate Change (IPCC) said in a 2021 report that "future climate variability (is) expected to enhance the risk and severity of wildfires."

World Weather Attribution (WWA), a group of scientists based in the United Kingdom and the EU, uses a range of computer models to calculate the probability of more intense fires.

The group's methodology includes observational trend analysis -- similar to what is mentioned in the article -- and seven other procedures, including climate model evaluation and analysis. The latter step calculates how much more likely an event has become due to human-caused emissions by comparing measurements under current conditions to those of a hypothetical world without such emissions and the consequent warming.

"Observations alone cannot show what caused the trend. In order to attribute the observed trend to global warming (or not), we have to use climate models," WWA says in its methodology.

"These are similar to the weather models that we use to forecast the weather of the next days to weeks, but instead of predicting the specific weather the next few days, they predict the statistics of it: how often extreme events occur in the computed weather in the climate model."

For example, after record bushfires struck Australia in 2019 and 2020, WWA calculated that the probability of fires of that intensity had risen by at least 30 percent since 1900 due to climate change.

A WWA study published in June 2022 found that climate change had made the 2017 and 2021 forest fires in Canada's British Columbia two to four times more likely, and a 2016 fire in Alberta 1.5 to six times more likely.

Climate change made the 2018 fires in Sweden 10 percent more likely and the fires in southern China in 2019 were seven times more likely, according to the WWA.

Climate models such as these and the ones used by the IPCC are a frequent target of attacks by climate skeptics. Here is an explanation of how these complex models work.

AFP has fact-checked other claims relating to climate change here.