Facebook posts circulating in Sri Lanka have repeatedly shared purported advice from a leading cancer treatment facility that claims coconut water can cure the disease. Experts told AFP the claim is not backed by credible scientific evidence; and the Tata Memorial Hospital in India has previously warned it did not issue the "fake" message.

The post instructs readers to soak a few pieces of coconut kernel in warm water.

"It will create an alkaline water. Consume it daily, it is good for anybody," the Sinhala-language post claims.

"This concoction also releases a substance that has the ability to kill cancer cells. This is the latest discovery in treating cancers." 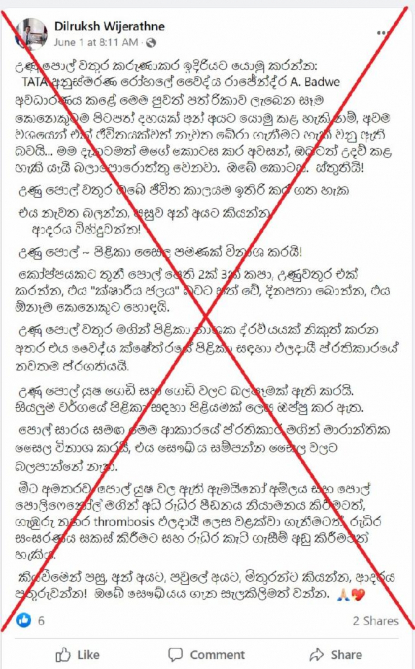 An identical claim was shared on Facebook here and here, and has circulated on the private messaging platform WhatsApp.

But responding to the posts, Dr. A. J. Hilmi, former president of the Sri Lanka Oncologists Association, told AFP on June 10: "There is no credible, scientific evidence to prove this claim."

"The damage in such claims is that patients tend to abandon the treatment regimes prescribed by doctors to opt for such alternative methods and the results can sometimes be fatal," he added.

Alice Wilson, spokesperson for the UK charity Cancer Research, separately told AFP the claim was not backed by scientific evidence.

"It's completely understandable that patients may wish to consider all their options when they have cancer, but it's vital that whenever patients consider using complementary or alternative therapies, they consult their doctor."

Tata Memorial Hospital had also denied issuing the advice, in a statement posted on Facebook on May 18, 2019, in response to the same claim, which has circulated previously.

"This is a fake message and neither Dr. Badwe nor the Tata Memorial Center subscribes to this view," the statement reads.

"There is no data to suggest that hot coconut water can provide cures for any type of cancer."