An image that appears to show South Korea's former president Moon Jae-in with his eyes closed has been repeatedly shared in Korean-language social media posts that misleadingly claim Moon fell asleep and missed his turn to speak during a virtual meeting of world leaders. In fact, the image was taken from footage of the 2020 G20 Riyadh virtual summit during a session when Moon was not scheduled to speak. AFP found no credible reports he dozed off and missed a chance to talk during the entire summit.

The image's Korean-language caption translates to English in part as: "G20 leaders are being broadcast live on camera... It was South Korea's turn to speak, but because [Moon] was sleeping... They skipped his turn and moved on to the next [leader]. Such a humiliation."

The summit was hosted by Saudi Arabia from November 21 to 22, 2020. Non-Saudi participants attended the event virtually due to the pandemic, AFP reported. 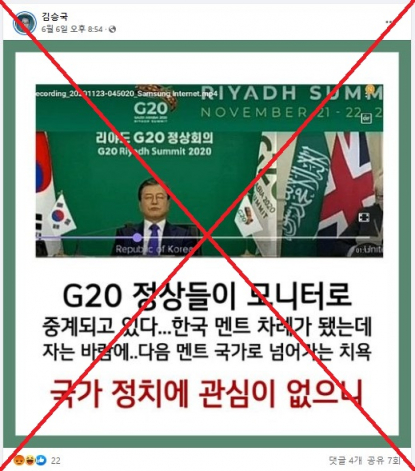 Screenshot of the misleading claim shared on Facebook. Captured June 8, 2022.

The image was also shared alongside a similar claim on Facebook here, here, here and here.

Comments on the posts suggested some users were misled by the claim.

"Did he not sleep at home?," wrote one user. "What a national embarrassment this is," said another.

However, a Google keyword search found the image corresponds to the nine-minute 23-second mark of footage from the summit posted by Forbes Middle East to YouTube on November 23, 2020.

AFP reviewed the entire video and found no indication that Moon was scheduled to speak, or that his turn was skipped.

It shows Saudi Arabian King Salman bin Abdulaziz and then Italian prime minister Giuseppe Conte delivering their closing remarks on the second day of the summit to the G20 leaders, who were broadcast on separate screens.

Below is a screenshot comparison between the image shared with the misleading claim on Facebook (left) and the corresponding frame in the YouTube video (right):

Moon delivered two separate addresses on the first and second days of the summit, which dealt with recovery from the pandemic and sustainable development, respectively.

South Korea's presidential office at the time gave separate press briefings on Moon's comments during the first and second days of the summit, covering topics such as multilateralism and carbon neutrality.

Footage of Moon speaking during the summit can be seen in news clips from South Korean broadcasters YTN, KTV and Arirang News.