A photo that shows Sri Lanka's former prime minister Mahinda Rajapaksa boarding an air force helicopter was repeatedly shared on Facebook and WhatsApp alongside a claim it was taken after Rajapaksa's resignation on May 9, 2022. While Rajapaksa was evacuated by the military after his residence was besieged by an angry crowd, the photo has been shared in a misleading context. It was published in 2015 news reports about Rajapaksa leaving the capital Colombo after he lost in that year's presidential elections.

The photo was shared on Facebook on May 10 -- and overlaid with text that says "JUST IN".

The post's Sinhala-language caption translates in part as: "Saddened and ashamed of what is happening right now.

"It is only the protesting public, who were shot at and shed their blood, who love the country. It is the country's misfortune that you [the Sri Lanka Air Force] extend no support and would much rather carry out your orders.

"But this lot of thieves will not escape karma no matter where they flee." 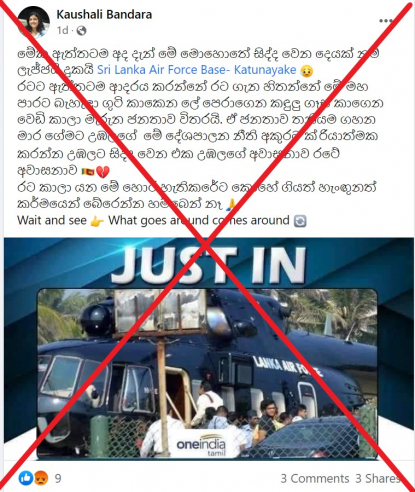 Rajapaksa resigned as prime minister on May 9 after his supporters attacked anti-government protesters and sparked a day of violence.

He had to be evacuated by the military from his official residence in the capital Colombo after it was besieged by an angry crowd, AFP reported.

The 76-year-old heads a political clan whose hold on power has been shaken by months of blackouts and shortages in the island nation, which is suffering its worst economic crisis since independence in 1948.

The identical image was shared alongside a similar claim on Facebook here and here, and Twitter here.

It was also widely shared on the private messaging application WhatsApp with the caption: "Are we letting them just go? I think it's time the Military and the Police choose a side. Are you all with the people of the country or are you on the side of the terrorists?"

One wrote: "What kind of nonsense is this? He is no longer the prime minister, why is he being awarded these protections by the military?"

Another said: "Our air force that is maintained by our money is helping the thief flee to India!"

But Google reverse searches found the photo has been shared in a misleading context.

The photo is captioned: "Former President Mahinda Rajapaksa boards a Sri Lanka Air Force Mi-17 helicopter for his flight to Tangalle. His sons Namal, Yoshitha and Rohitha went with him."

He was appointed prime minister in November 2019 by his younger brother Gotabaya, who won the presidency.

Below is a screenshot comparison between the photo in the misleading posts (left) and the image in the Sunday Times article (right):

The identical image was also published in this article from Sri Lankan news website Colombo Telegraph. The photo was dated January 9, 2015 and bears the same caption.