A video has been viewed hundreds of times in Facebook and Twitter posts that claim that it shows a massive traffic jam in Malaysia during the Eid holidays in 2022. The video circulated as Malaysians returned to their hometowns to celebrate the end of the Islamic holy month of Ramadan. The claim is false; the footage was shot in Indonesia in March 2022, before Ramadan.

The video, which shows a long traffic jam on a highway, was posted on Facebook on April 30, 2022.

The 30-second video has since been viewed more than 400 times. 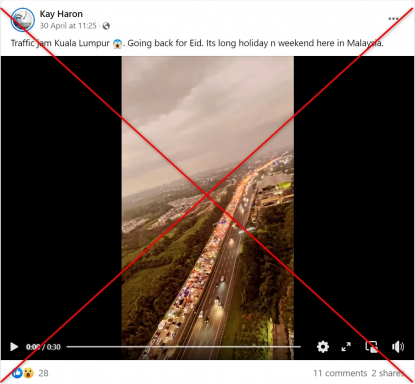 The video circulated as Malaysians travelled to their hometowns to celebrate Eid al-Fitr, which fell on May 2, 2022, with their families.

The country's highway operator PLUS Malaysia said it expected more than two million vehicles on the roads during the holiday, which marks the end of the holy fasting month of Ramadan.

The video has been viewed more than 1,300 times alongside similar claims on Facebook here and here, and on Twitter here and here.

Speaking in Indonesian, a woman off-camera says: "The later it got in the evening, the worse it became... mashallah [an expression of surprise]... feel sorry for the people who are stuck in the traffic, guys... it's very bad, incredible.... could a weekend be this horrific?"

A combination of a reverse image search and keyword searches found the video posted here, here and here by Indonesian TikTok user @princess.all.shop  between April 24 and April 26, 2022.

In the posts, she said she was the woman heard speaking in the video, which she filmed herself.

She said the footage was taken during a traffic jam on March 27, 2022 at a toll road in Sentul, a city in Bogor regency near the Indonesian capital Jakarta.

The same user posted a video on April 25, 2022, showing a view of the same toll road from her residence during daytime and urged people not to use her video to spread hoaxes.

Text superimposed in the video said that the original footage "was taken in the last week before Ramadan".

In Muslim-majority countries Malaysia and Indonesia, the fasting month of Ramadan began on April 3, 2022.

Adlina Alin, the businesswoman who owns the TikTok account, told AFP on May 12, 2022, that she posted the original video on Instagram Story and WhatsApp Story, but "people stole it".

Furthermore, buildings seen in the first few seconds of the video correspond with buildings on Google Maps of Sentul.

Below is a screenshot comparison of the video in the misleading post (above) and the Google Maps image (below), which corresponding featured marked by AFP: 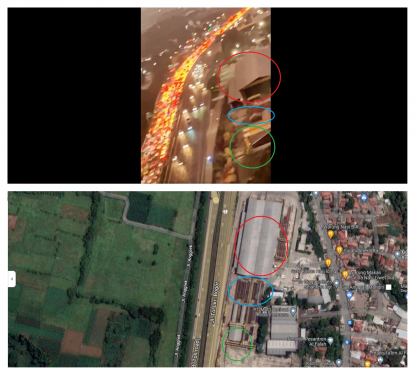 The toll road in Sentul is part of the the Jagorawi toll road, which links Jakarta to neighbouring districts of Bogor and Ciawi.

The massive traffic jam on the Jagorawi toll road on March 27, 2022, was due to Jakarta residents returning from weekend trips, Indonesian media reported here and here.