A photo has been shared hundreds of times in social media posts alongside a claim it shows a policeman being attacked as religious clashes broke out in India's capital Delhi in April 2022. While there were media reports that police officers were injured in a recent communal incident in Delhi, the image featured in the posts has been shared in a misleading context. It has circulated since 2019 in reports about protests in western India over a controversial citizenship law.

The photo shows a man dressed in what looks like police uniform lying on the ground surrounded by a group of people. One seems to be about to throw something at him.

The Hindi-language caption translates as: "This is the situation in Delhi, look at the situation of the police in Delhi, what will happen to the common Hindu? #DelhiRiots #Jahangirpuri." 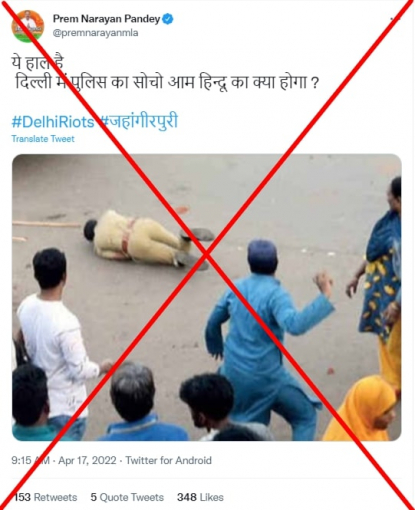 A screenshot of the misleading tweet captured on April 27, 2022

The post circulated after an incident on April 16 when a Hindu religious procession in northwest Delhi's Jahangirpuri neighbourhood -- where many Bengali-speaking Muslims live -- sparked communal violence, injuring nine people including seven police officers, the BBC reported.

Both sides blame each other for the violence in which more than 20 people were arrested.

English-language daily The Statesman also tweeted the same image in its report about the clashes in Jahangirpuri.

However, the use of the photo is misleading.

A reverse image search found the photo published in this article by the Times of India on December 20, 2019.

The photo is captioned: "People attack a policeman in Shah-E-Alam area in Ahmedabad on Thursday."

"At least 30, including 12 policemen, among them officials including a DCP, an ACP and a Police Inspector, were injured due to stone-pelting and assault," the article reads.

Below is a screenshot comparison of the image in the misleading post (left) and the image published in the Times of India article (right). 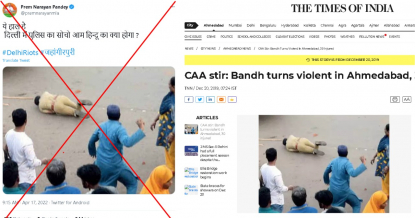 The report says the clashes happened during demonstrations in the western city of Ahmedabad in Gujarat state against the Citizenship Amendment Act (CAA).

Passed in 2019, the law makes it easier for religious minorities from three neighbouring countries to get Indian citizenship -- but not if they are Muslim.

Similar images of the attack on the policeman were also published by other local media outlets including the Navbharat Times and The Economic Times.

The attack on the police officer can be seen at the 41-second mark of the video. The women standing in the corner of the image can be seen in the screenshot comparison of the misleading post (left) and the video from Aaj Tak (right).

The man dressed in blue who looks to be throwing something is also clearly visible in other parts of the video.

The video report said the crowd suddenly became furious and attacked the police, with some individuals later arrested for violence.