Skip to main content
Will Smith (R) slaps Chris Rock on stage during the 94th Oscars at the Dolby Theatre in Hollywood, California on March 27, 2022 ( AFP / Robyn Beck)

Social media posts claim a collage of Hollywood celebrities' stunned faces shows their reactions to Will Smith hitting Chris Rock on stage during the 2022 Academy Awards ceremony. This is false; the images are from 2017, when "La La Land" was mistakenly announced instead of "Moonlight" as the winner of the Oscar for Best Picture.

Smith struck Rock after the latter made a joke comparing the former's wife Jada Pinkett Smith to the character "G.I. Jane."

Pinkett Smith, who suffers from alopecia, did not laugh and -- despite initially smiling at Rock's comments -- her 53-year-old husband stormed onstage, smacking Rock with an open hand before returning to his seat.

The highly unusual moment set social media alight, sparking numerous memes and opinions both defending and condemning the star of "King Richard," who later in the evening was honored with the Oscar for Best Actor.

The altercation stunned various celebrities at the event, as well as millions watching at home.

But an unrelated collage started spreading on Facebook, with one post gathering nearly 100,000 shares, and on Twitter, alongside claims that it depicts the audience's reaction to Smith slapping Rock. 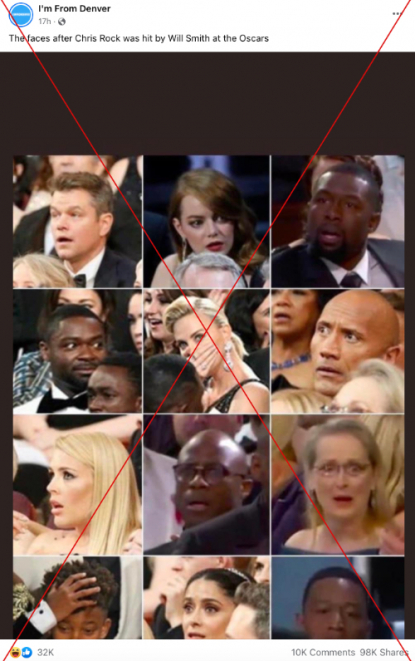 However, the images in the posts are from February 2017.

AFP Fact Check found that the still images of the audience were taken during the Best Picture mix-up at the 2017 Academy Awards ceremony.

The full clip of the incident -- which includes singer and actor John Legend's reaction -- is available on the Oscars YouTube channel here.

Actor Trevante Rhodes and director Barry Jenkins, both of "Moonlight," can be seen reacting to the news their movie won Best Picture here.

Emma Stone, lead actress in "La La Land," is also seen reacting to the news in a Reuters image here.

The images of actors and actresses Dwayne Johnson, Salma Hayek, Matt Damon, Busy Philipps and Michelle Williams can be seen in this Los Angeles Times photo.

The shocked reaction of actor Jaden Piner, also from the cast of "Moonlight," who was 12 years old at the time, can be seen in an AFP photo here.

Actor Mel Gibson's reaction is seen in an Associated Press photo here, while actor Ryan Gosling's image is also from an AP photo.

As the "La La Land" film's crew gave their acceptance speeches, they realized the mistake and announced that "Moonlight" had actually won.