Footage of Indian police assaulting a man has circulated online alongside a claim they were punishing him for voicing support for New Delhi's rival Pakistan during polls in India’s most populous state Uttar Pradesh. The polls saw the Hindu nationalist ruling Bharatiya Janata Party retain power in the state. But the video -- which has been viewed tens of thousands of times -- has been shared in a misleading context. It has circulated online since May 2021, months before the Uttar Pradesh polls. State police told AFP the clip shows officers who were suspended for assaulting boys accused of stealing last year.

The post’s Hindi-language caption translates to English as: “The one who chanted "Long Live Pakistan" two days ago is being rewarded by the Uttar Pradesh police.” 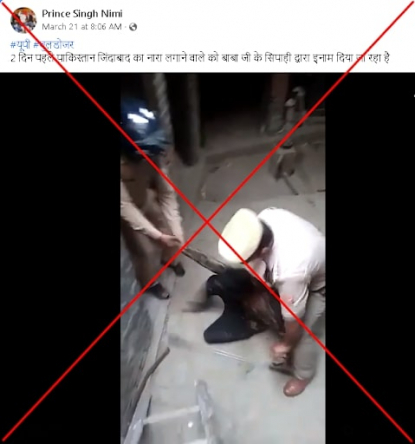 The video was viewed more than 25,000 times alongside a similar claim on Facebook here, here and here; and on Twitter here.

“Bulldozer baba's police teaching lesson to people who raised slogans like long live Pakistan,” one of the posts states.

“Watch the value of your vote today in Uttar Pradesh. Police beat up [young men] for raising slogans in support of Pakistan,” one social media user commented on the video.

During the campaign, Adityanath railed against "anti-nationals" -- seen as a euphemism for Muslims who make up around one-fifth of the northern state's population.

He rose from humble beginnings to become the head priest of a notable Hindu temple and founded a vigilante youth group.

A keyword search on Google found the video was previously published in this report by the Indian newspaper The Times of India on May 6, 2021.

It is about police assaulting "minors" in Uttar Pradesh's Chandauli district.

“In the video, the cops can be seen beating the minors using a cane.

“After the video went viral, top police officials suspended the SHO and a constable of the Balua police station in Chandauli district.”

Below is a screenshot comparison of the video in the misleading posts (left) and the video published by The Times of India (right):

The incident was also reported by Hindi news websites Dainik Jagran, Hindustan and Amar Ujala in May 2021.

Responding to the misleading posts, a representative for the Chandauli police told AFP: “Contrary to the claims, the three boys were caught stealing in a mobile shop and the owner informed the police.

“The cops present at the spot assaulted the minors following which they were suspended.”

Chandauli police also refuted the claim shared in the misleading posts in a statement posted here on Twitter on March 20, 2022.

“The case is more than a year old in which departmental action has been taken by suspending both the policemen at the time due to the inhumane treatment done to the children,” the statement reads in part.