A video has been viewed millions of times online alongside a claim it shows a young Ukrainian boy crying helplessly after fleeing to neighbouring Poland "alone". This is misleading. Reuters news agency, which filmed the footage, told AFP that the boy was seen walking behind his mother in the second half of the video. The Polish Border Guard separately clarified that the boy was "with his family" when he crossed into Poland.

The post's Chinese-language caption translates to English in part as, "A Ukrainian boy crossed through Poland's border alone, crying as he walks, with only a plastic bag of his belongings and no family accompanying him.

"The greatest victims of war are ordinary citizens. My heart hurts so much. I don't know where he is, if anyone does please tell me, I can take him in." 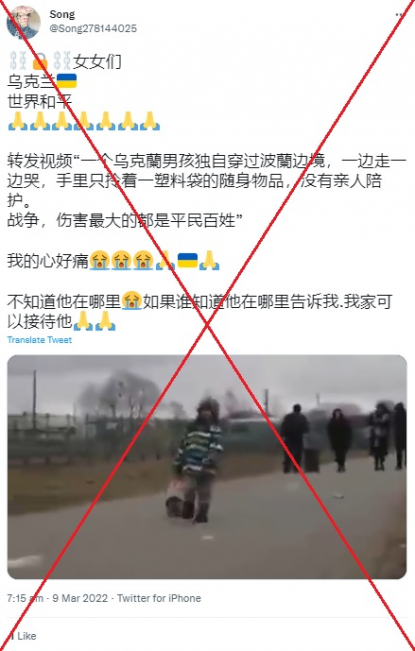 Six in every 10 Ukrainian refugees have crossed the Polish border. Many of those heading west from Ukraine into Poland, Hungary and Slovakia then travel further on into other countries in Europe's Schengen open-borders zone.

Images with the same claim also circulated in Poland on Facebook here.

A Google keyword search found the same video was posted here by the Taiwanese newspaper United Daily News on March 8, 2022.

"A video journalist visited the border town of Medyka in southeastern Poland and filmed a boy who appeared to be alone walking and crying," the Chinese-language report reads in part.

"The good news is that according to information released later by the Polish border guard, the little boy is not alone. He was with his family and is now safe in Poland."

The newspaper credited the footage to Reuters news agency.

Below is a screenshot comparison of the video in the misleading posts (left) and from the United Daily News report (right):

Responding to the misleading posts, Reuters told AFP, "The boy in the start of the video is not an unaccompanied minor, his mother can be seen walking in the group ahead of him in the second shot."

The second part of the footage can be seen below, in which a group of people can be seen walking in front of the boy: 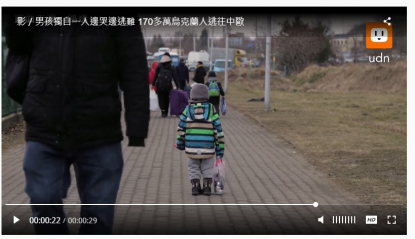 A screenshot of the second part of the footage

The Polish Border Guard also clarified that the footage does not show a child crossing the Polish border "alone".

"We would like to inform you that, contrary to information which has unfortunately been shared in the media, 4-year-old Valerij from Ukraine did not cross the border alone, he was with his family," reads a statement posted here on the Twitter account of the Polish Border Guard on March 8, 2022.