Picture showing cars with smashed windows are circulating in multiple social media posts that claim they are vehicles in Ukraine targeted after the Russian invasion for displaying stickers of the Chinese flag. In fact, the pictures were digitally altered to add the flag and were taken years before Russia invaded Ukraine in February 2022.

The photos were shared on February 28 on a Facebook page with more than 80,000 followers.

The Facebook post says: "Listen to the will of the [Communist] party and follow the party's instructions. Location: Underground parking lot in Ukraine's capital Kyiv #brokenglass". 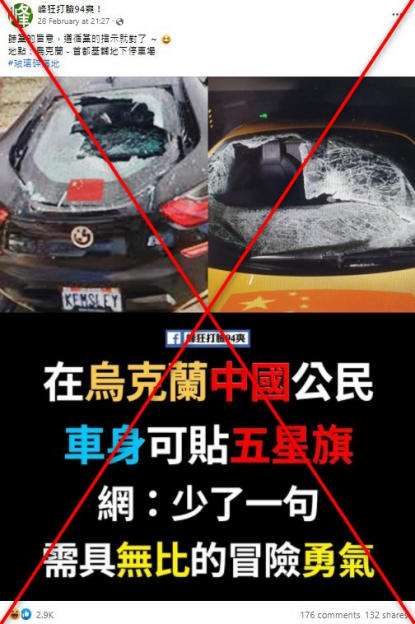 A screenshot of the misleading post taken on March 8, 2022.

Chinese nationals in Ukraine say they have experienced hostility and even attacks following the Russian invasion on February 24, the Financial Times reported.

Beijing has refused to condemn Moscow's actions and in February touted a "no limits" friendship between the two countries.

However, the photos were first published in 2017 and are unrelated to the conflict in Ukraine.

Reverse image searches and keyword searches on Google of the first photo traced it to a Facebook post from October 31, 2017.

The post includes various photos of the smashed car posted by a US-based Facebook user called Daryl Kemsley, who said he "woke up this morning to my parked i8 damaged and vandalized right in front of my home".

He also posted a video of himself walking around the smashed-up car and offering a $10,000 reward for information.

Below is a comparison of the photo in misleading posts (left) and the original photo in Kemsley's Facebook post (right). 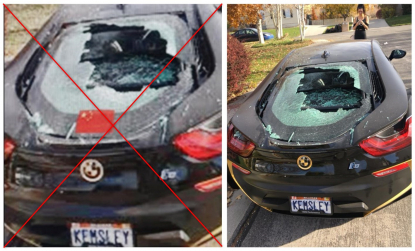 A reverse image search on Google of the second photo found it in a news report from December 18, 2017 by Chinese newspaper The Paper.

"Smashed Ferrari, Aston Martin and eight other cars, man steals money and causes up to 700,000 yuan in damages," the Chinese-language headline reads.

The photo caption reads: "A Ferrari with a smashed windshield. The pictures in this article are provided by the Shanghai Xuhui Police".

Below is a screenshot comparison of the altered photo (left) and the photo in The Paper's report (right):

A screenshot comparison of the second photo in the misleading post (left) and the photo in The Paper's news report (right).

Russia's invasion of Ukraine has triggered a wave of misinformation about the conflict. AFP has debunked some of the most viral claims here.