A video of military planes flying in formation over residential buildings has been viewed hundreds of thousands of times in posts that claim it shows Russian fighter jets entering neighbouring Ukraine in February 2022. The posts circulated online within hours of Russian President Vladimir Putin unleashing a full-scale ground invasion and air assault on Ukraine. The footage, however, has been shared in a false context. It has circulated since at least 2020 in social media posts about rehearsals for a Victory Day air show in Russia.

It shows ten planes flying above a residential area while a siren blares in the background. 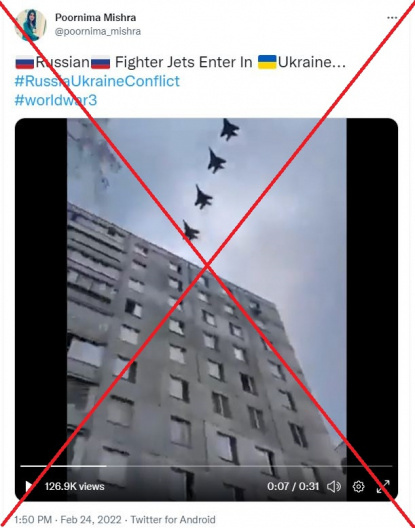 The video was shared alongside a similar claim in posts that have been viewed more than 130,000 times on Twitter here, here, and here; and on Facebook here and here.

It also circulated alongside a similar claim in Hungarian, Spanish, Malaysian, Burmese and Chinese.

The posts began circulating online within hours of Putin announcing that Russia had launched military operations on neighbouring Ukraine on February 24, 2022.

Explosions were soon reported in the Ukrainian capital Kyiv, and in several other cities, AFP reported here.

A reverse image search on Yandex found a longer version of the video here on YouTube on May 4, 2020.

No siren sound is heard in the genuine footage.

The Russian town of Tushino is located north of the country's capital Moscow.

Below is a screenshot comparison of stills captured from the video in the misleading post (L) and the video on YouTube (R): 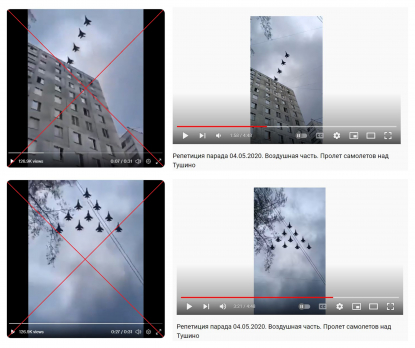 The footage also appeared in this compilation video uploaded to YouTube here on the same day. It is titled: "Flyby Moscow ( May 04, 2020)".

The video includes captions for military planes that it claims are shown in the footage -- including the TU-95, TU-160 and TU-22.

Russian state-owned news agency RIA Novosti reported on May 4, 2020, that rehearsals for an air show for the country's Victory Day military parade were underway in Moscow.

It also published a photo gallery on May 4, 2020 following the event.

It shows planes flying in the same formation as seen in the misleading video.

Below is a screenshot comparison of stills from the video in the misleading post (L) and RIA Novosti's photos (R): 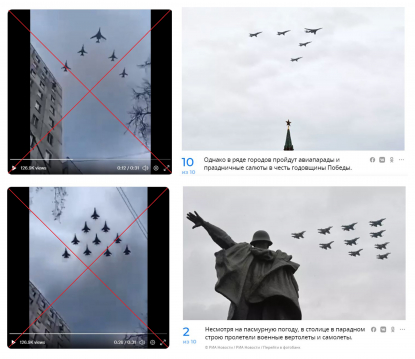 Although the main Victory Day military parade on May 9 was cancelled, the air show was set to go ahead, the report said.

Russia's Victory Day parade, an annual event to mark the end of World War II, was muted in 2020 due to Covid-19 restrictions.

However, AFP reported on May 9, 2020, that military helicopters, bombers, and fighter jets were still seen flying over the city to mark the occasion.

A lavish military parade for the 75th-anniversary celebration was held later on June 24, 2020.

The escalation of military and diplomatic tensions between Russia and Ukraine has been accompanied by a wave of online disinformation in recent weeks.