Social media posts claim the US Centers for Disease Control and Prevention lowered child speech development standards to cover up damage caused by mask use and lockdowns. But the agency and experts say the change was underway before the Covid-19 pandemic and is aimed at encouraging caregivers of children who miss milestones to seek help, not an attempt to minimize warning signs.

"The CDC just quietly lowered the standards for speech in early childhood development. Now children should know ~50 words at 30mo rather than 24mo. Instead of highlighting the harmful effects (masks) & lockdowns have had on children, the CDC just lowered the bar for milestones," says a February 17, 2022 tweet that was retweeted 14,000 times. 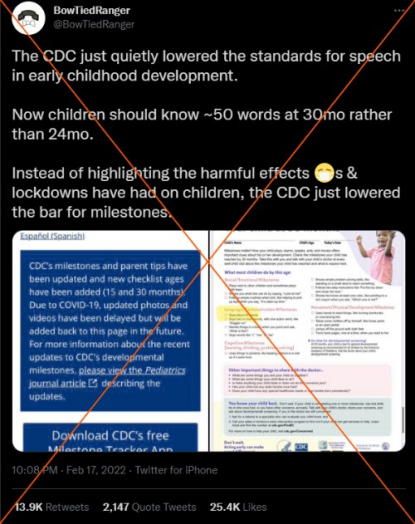 The claim -- which spread as calls to lift masks mandates in schools gain traction in the United States -- also appeared on Twitter here, on Facebook here and in an online article here.

More research is needed on the potential emotional, developmental and linguistic toll the pandemic is taking on children, but experts say preliminary data does not support the conclusion that mask use impairs speech development.

"The milestone revisions were in process for several years prior to the Covid-19 pandemic and are not related to the pandemic," CDC spokeswoman Belsie Gonzalez told AFP of the changes referenced in the claim circulating online.

The review of evidence and revisions were completed in 2019, before the pandemic began in the United States, she said.

The purpose of the update was to align milestones dates with American Academy of Pediatrics (AAP)-recommended well-child visits, which meant adding 15- and 30-month checklists, Gonzalez said. Also, the lists now contain "milestones that most children (at least 75 percent) would be expected to achieve by the specified age, as opposed to average age milestones."

Dennis Kuo, chair of the AAP Council on Children With Disabilities, explained that this is meant to dissuade parents from taking a "wait and see" approach to getting help for children who did not meet a milestone.

"It was felt that use of the 50 percent milestone, when only half of children would be expected to achieve that milestone at that age, led to too much waiting and observing," he said. On the other hand, using 75 percent "clarifies when you need to screen more thoroughly for developmental delays."

Kuo said: "The CDC did NOT lower the standards for speech in early childhood development. The checklists were updated to make them more useful."

Gonzalez and the AAP pointed to this report as the basis for the changes.

According to the report, "Evidence-Informed Milestones for Developmental Surveillance Tools," the CDC funded the AAP to convene an expert group and update the guidelines, which were last revised in 2004.

The eight experts, specialized in different fields of child development, conducted a "broad literature search" in March 2019, months before Covid-19 and measures to mitigate its spread reached the United States. They collaborated to assess, categorize and review milestones between January and September 2019.

The experts "used the available evidence base and their clinical experience to determine if and at what age a milestone would be included in the revised checklists. Only milestones with unanimous agreement were included," the report says.

One of the eight experts, developmental pediatrician Paul Lipkin, said the goal was "to provide clearer, up to date, and more accurate set of milestones for all parents to use in tracking their child's development."

He confirmed that work on the project began in January 2019 and said the new guidelines are based on research published prior to the pandemic.

Like Gonzalez and Kuo, Lipkin said the major change is that milestones are now set at the 75th percentile, rather than the 50th, to encourage early intervention.

"If most children exhibit that behavior and your child does not, the next recommended step is a conversation with your pediatrician to consider formal screening or evaluation," he said, recommending this article in Nature for more information on the toll of the pandemic on children.