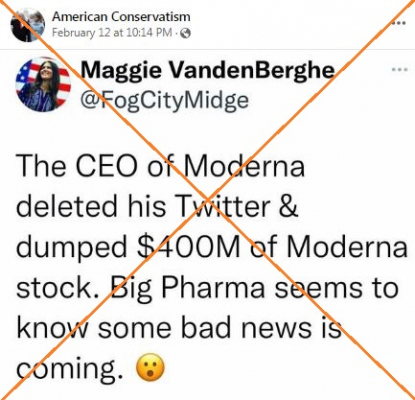 Moderna -- which makes one of the main Covid-19 vaccines used in the United States -- has been the subject of a series of inaccurate claims during the pandemic. The combination of the deactivation of Bancel's Twitter account and the suggestion of a major stock sale sparked suggestions that he was preparing for unspecified bad news.

The CEO's Twitter account is no longer available. Although it is not clear when exactly the account -- which has been largely inactive for several years -- was deactivated, social media users appear to have first reported its removal on February 9.

The claims about the stock sales are misleading. According to publicly accessible US Securities and Exchange Commission (SEC) records, Bancel has been selling Moderna stock on a regular basis since November 2019 and did not sell $400 million worth all at once. Some posts even falsely claim that he sold all his stock in the company.

In February, he sold a total of 38,000 shares as of the 18th of the month worth approximately $6.1 million. He also parted with another 8,000 shares that were labeled as a charitable gift, based on disclosures required under federal securities regulations for trades by insiders.

These transactions follow a longstanding pattern involving the sale of the same amount of shares on a weekly basis, according to the regulatory filings, which note that the transactions were made in accordance with Rule 10b5-1 of the Securities and Exchange Act of 1934.

This rule enables trading by company executives "without creating the prospect of an insider trading violation," said Jacob Frenkel, an attorney who is a former SEC Enforcement counsel and former US federal prosecutor.

Under the rule, "you enter into a prearranged, not subject to modification, plan or program to sell shares," Frenkel said, adding that "it does not matter what the stock is doing -- up (or) down. You've basically locked in a scheduled set of sales subject to that program."

Bancel has had multiple predetermined sale plans, the first of which were created at the time the biotech firm went public in 2018..

Frenkel said the social media posts suggesting any impropriety about these sales "do not align with the disclosures" and "reflect a lack of understanding" of federal securities legal requirements for insider transactions.

The SEC filings show Bancel has sold approximately $400 million in stock since 2019 and still has more  than 21 million shares valued at some $3.2 billion at the current price in the company which has a market value of nearly $60 billion.

Moderna did not respond to requests for comment by the time of publication.