An image of a ground fissure has been shared repeatedly in Sri Lankan social media posts alongside a claim it shows a portion of the San Andreas Fault in California. In reality, the image shows a geological formation called the Black Crack in the US state of Utah, which an expert told AFP is unrelated to the San Andreas Fault.

Its Sinhala-language caption translates as: "Considered one of the most dangerous locations in the world, the San Andreas fault is located in western USA's state of California. This crack that is 1200 km in length runs along the north American and Pacific plates." 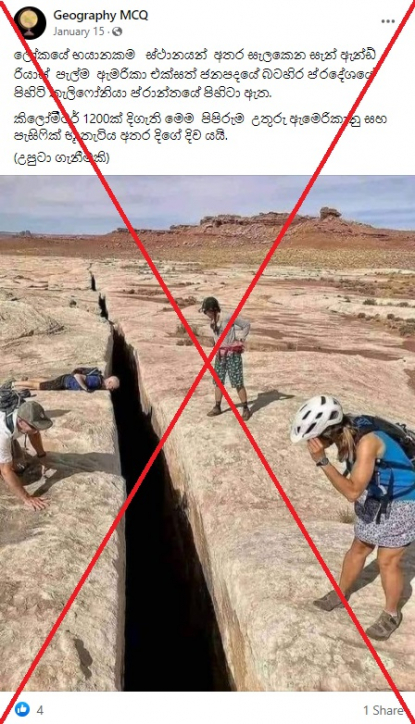 The San Andreas Fault is a major fracture of the Earth's crust found in California.

According to the United States Geological Survey, the fault is more than 800 miles long -- which converts to around 1,300 km contrary to the posts.

It is frequently linked to fears of the "Big One" -- a powerful tremor that could devastate major cities in Southern California.

However, reverse searches found the image had been shared in a false context.

It was originally published by The Washington Post newspaper here on November 20, 2020 in a report about a bike and camping trip in the Canyonlands National Park in Utah.

The caption to the photo identifies the geological feature as, "Black Crack, a 65 foot-deep fissure running through a plate of sandstone."

Below is a screenshot comparison of the image shared in the misleading posts (L) and the photo from The Washington Post (R): 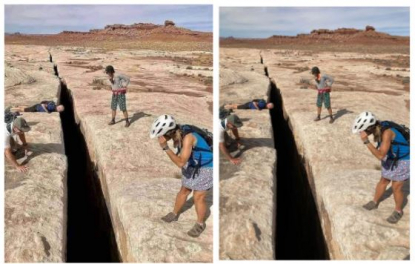 Canyonlands National Park in southeastern Utah published a similar photo of the fissure in its Facebook page on June 27, 2012.

In the comments, the park stated: "Black Crack is an example of a geologic feature called a 'joint'. In a fault, the rock fractures and one side of the fracture moves relative to the other.

"Joints are fractures in the rock that exhibit no movement. Joints are often the result of expansion, whether by freeze/thaw or other forces, such as a release of pressure through erosion.

"The fissure is located [around] 800km from the San Andreas fault; it has nothing to do with the San Andreas or any active fault," Amir Allam, Research Assistant Professor of Geology and Geophysics at the University of Utah, told AFP.

"To my understanding, this fissure first started as small crack (fracture) that formed during the uplift of the Colorado plateau. It has been enlarged by water erosion and frost wedging.

"This is a fairly common type of feature in the National Park of Utah," Allam said.