Skip to main content
Top Senate Democrat Chuck Schumer speaks to the press in Washington prior to a meeting to discuss a legislative response to the novel coronavirus on March 20, 2019 (Credit: Saul Loeb / AFP)

Democrats did vote for legislation to combat the novel coronavirus crisis

Posts on social media claim that no Democrats voted for the “the stimulus package to help American families” during the novel coronavirus crisis. This is misleading; Democrats overwhelmingly backed two bills aimed at countering the virus and its fallout, and while senators from the party blocked an initial proposal for the third, they voted unanimously for a later version.

“Not ONE DEMOCRAT, not ONE… Voted for the Stimulus Package to help American Families. Not a Single One,” say some of the posts, which have circulated on Facebook since late March and have also been shared on Instagram. 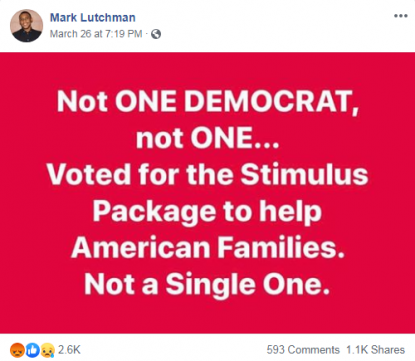 Others picture House Speaker Nancy Pelosi, and make the same voting claim but add that this was “Because it DID NOT contain ABORTION Slush Funds” that the top Democratic lawmaker allegedly demanded.

The posts were apparently sparked by stances taken by Democratic senators -- who said the initial version of the legislation did not do enough to protect workers or assist the health care system -- and continue to circulate despite the fact that lawmakers from the party ultimately voted for all three of the measures designed to address the novel coronavirus crisis.

The pandemic has killed more than 125,000 people worldwide so far, and wreaked havoc on the global economy.

But when it came to final votes on the first two pieces of coronavirus-related legislation, it was Republicans -- not Democrats -- who voted no.

AFP Fact Check breaks down the votes on the legislation below.

“This bill provides $8.3 billion in emergency funding for federal agencies to respond to the coronavirus outbreak,” a summary on the US Congress website says.

The bill passed the House of Representatives on March 4, 2020 415-2. The two lawmakers who voted against it were Republicans.

It went to the Senate the following day, where it passed 96-1, with a Republican the sole senator to oppose it.

President Donald Trump signed it into law on March 6.

The House of Representatives approved the bill on March 14 363-40, with only Republicans voting against it.

The Senate passed the bill 90-8 on March 18, again with only Republicans voting against it. Trump signed it the same day.

“This bill responds to the COVID-19 (i.e., coronavirus disease 2019) outbreak and its impact on the economy, public health, state and local governments, individuals, and businesses,” a summary of the version that ultimately passed the Senate says.

Among other steps, it “funds various loans, grants, and other forms of assistance for businesses, industries, states, local governments, and hospitals” and “provides tax rebates of up to $1,200 per individual and an additional $500 per child, subject to limits based on adjusted gross income.”

Senate Democrats blocked the advance of an initial version of the measure in procedural votes on March 22 and March 23, with one Democratic senator voting in favor on the latter day.

A day of intense negotiations followed, and an updated version of the bill passed the Senate 96-0 on March 25.

It was agreed to by voice vote in the House of Representatives two days later, and was signed into law by Trump the same day.

Why did Senate Democrats temporarily block the bill?

While Democrats temporarily blocked the advance of the CARES Act in the Senate, they were in favor overall and worked to negotiate changes to the bill.

“We voted no on the McConnell-GOP bill because among other problems it includes huge bailouts without protections for people and workers and without accountability, and because it shortchanges our hospitals and healthcare workers who need our help,” top Senate Democrat Chuck Schumer tweeted on March 22, raising similar issues the following day. 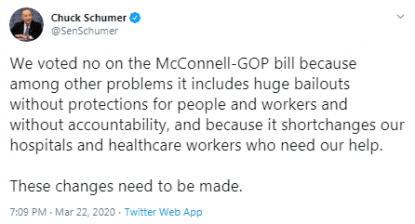 Senate Majority Leader Mitch McConnell criticized Democrats on March 23 for making “unrelated demands,” but abortion is not on the list, as it would have been had it been a major reason for the delay in passing the legislation. 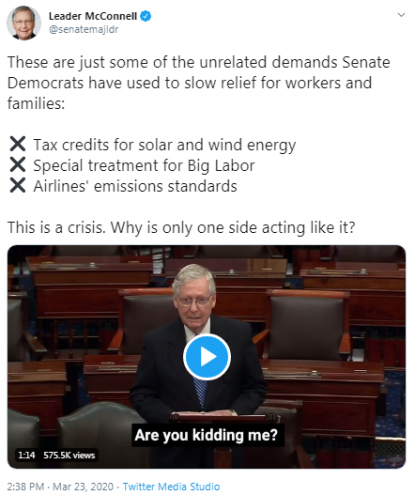 Planned Parenthood -- a major provider of reproductive health services, including abortions -- issued a statement on March 25 saying the legislation that Democrats voted for in the Senate “gives the Small Business Administration broad discretion to exclude Planned Parenthood affiliates.”

“In addition, the bill attaches a new unnecessary Hyde Amendment provision, a harmful policy that prevents people with low incomes from accessing safe and legal abortion coverage,” it said.

AFP Fact Check has debunked more than 310 examples of false or misleading information about the novel coronavirus crisis. A complete list of our fact checks on the topic in English can be found here.