A post shared more than 24,000 times on Facebook says the Affordable Care Act, better known as Obamacare, contains the word “dhimmitude”, claiming it exempts Muslims from the requirement to obtain health insurance. This is false: the word is not included in the legislation and there never was an exemption for Muslims.

“THIS MAKES MY BLOOD BOIL AND SETS MY HAIR ON FIRE!!! What does this word mean? Dhimmitude,” a May 17, 2020 post starts before claiming the term is in the law. “It's on Page 107 of the Obama healthcare bill. I looked this up on Google and, yep, it exists,” the post continues. “The ObamaCare bill is the establishment of Dhimmitude and Sharia” Islamic law, it adds. 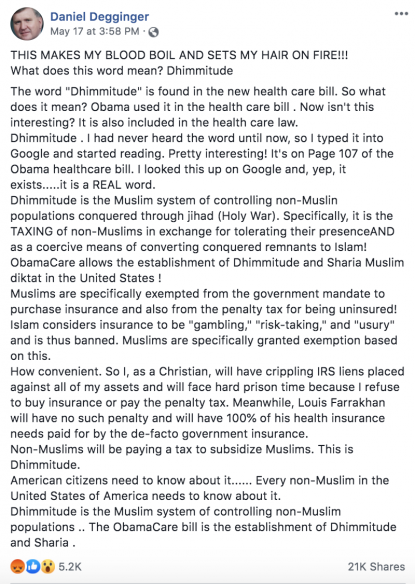 The reforms that took effect under former US President Barack Obama in 2010 allowed millions of previously uninsured Americans to obtain health insurance. Although his successor Donald Trump has unsuccessfully sought to repeal the law, the incumbent president’s policies have made it harder to sign up under the market exchanges created by the Affordable Care Act.

“Muslims are specifically exempted from the government mandate to purchase insurance and also from the penalty tax for being uninsured,” the post says. “Non-Muslims will be paying a tax to subsidize Muslims. This is Dhimmitude,” it continues.

According to the Harvard Religious Literacy Project, a dhimmi -- where the word “dhimmitude” comes from -- “refers to a non-Muslim subject of the Ottoman Empire” who was given protection by the state in return for specific taxes. The dhimmi status was abolished in 1839.

The full version of the Affordable Care Act can be found here and contains no mention of the term “dhimmitude.”

In its original form, the health care reform required Americans to buy medical insurance or face a financial penalty. Republican lawmakers in 2017 suppressed that provision, years after the Supreme Court ruled that Congress had the right to do so.

Before 2019, a series of exemptions were required to avoid paying a penalty when uninsured. Members of an approved religious sect or division opposed to accepting insurance benefits could ask for a health coverage exemption, and therefore not be required to pay a penalty if they were uninsured.

Claims about the Affordable Care Act with a similar or identical text -- here or here -- have been circulating in email chains, forums and Facebook posts since the bill was introduced, and some were previously fact-checked.

The post also claims that “as a Christian,” someone could face “hard prison time”  for refusing “to buy insurance or pay the penalty tax.” This is also false. As of 2019, there is no longer a federal penalty applicable for being uninsured.