A video shared by the Hungarian government says European parliamentarian Guy Verhofstadt is calling for more migration to Europe. But the short clip from a four-year-old video is taken out of context, as a quick video analysis shows. 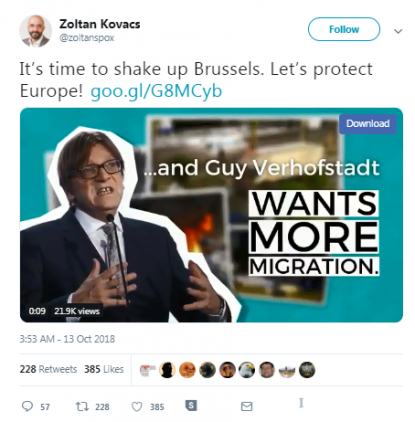 The video includes dramatic music and a voiceover with an American accent saying:

“This is Guy Verhofstadt. He wants more migration. These are the facts: 1.8 million migrants have entered the EU since 2015. Millions more wish to come. Since the crisis began, hundreds have lost their lives in vicious attacks all across Europe. Violent crime is rising and Guy Verhofstadt wants more migration. This is reckless. Time to shake up Brussels. Let’s protect Europe.”

A quick check with the INVID plugin, a tool to help verify videos and still images, finds a link to the original video, which had been posted in comments below.

In the original, posted four years ago on Vimeo, Verhofstadt says:

"I think that we have to develop the fastest as possible a legal migration policy in Europe. We need migration. But we need legal migration. For the moment, we have the opposite. We have illegal migration and human trafficking. So what we have to do is to develop as the Canadians have, as the Australians have done, as the Americans have done, a legal economic migration policy because in a number of countries, certainly in Germany, we shall need bright, young people coming from outside the European Union to build up our economy.”

INVID enabled us to break the video into single frames and search on the Google and Yandex search engines to see where else the video had appeared.

One frame, with the out-of-context subtitle “we need migration”, had been shared numerous times in Hungary and also Finland. 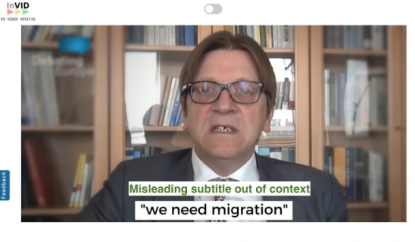 The Hungarian video was also posted on an official website, with the following text to introduce it:

“We do not want to become an immigrant country. That’s why the government has released this English-language internet video in response to the affronts to our country.”

Guy Verhofstadt later tweeted the Hungarian video, including a link to the original.

The video was in a similar style and format to others that have accompanied questionnaires put to the Hungarian public by the government since the 2015 migration crisis.

Those videos, in Hungarian, have variously attacked US billionaire George Soros, the EU, and local non-governmental organisations (NGOs) for allegedly supporting immigration.

Human rights NGO the Hungarian Helsinki Committee has successfully sued the government for defamation over false statements in one of the questionnaire campaigns. The government has appealed that verdict at the Hungarian Supreme Court.

The Hungarian-born Soros said last year that a government video and billboard campaign that claimed he wanted to settle migrants in Hungary contained “distortions and outright lies that deliberately mislead Hungarians”.

AFP journalist in Hungary
All posts

No, Nirvana frontman Kurt Cobain did not predict a Donald Trump presidency

No, this is not the skeleton of biblical giant Goliath