A video has been viewed tens of thousands of times in multiple posts on Twitter which claim it shows a hotel by a lake in the Chinese city of Huzhou that closed due to severe flooding in July 2020. The claim is misleading; both the hotel and the city’s tourism board issued statements saying the hotel had remained open despite flooding in the region; keyword searches for references to a closure in customer reviews for the hotel in July 2020 yielded no results.

The 13-second video shows a building surrounded by water. A simplified Chinese-language sign can be seen among sunken guardrails. It translates to English as “Moon Pier”. 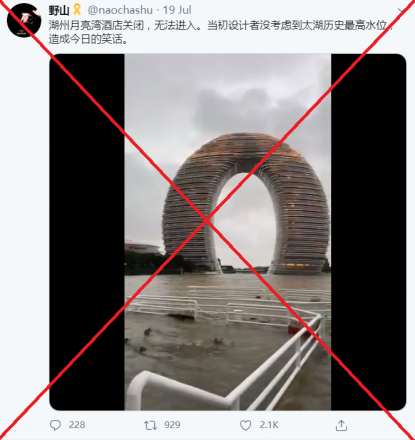 A screenshot taken on July 29, 2020 of the misleading tweet

The post’s caption, also written in simplified Chinese characters, translates to English as: “Sheraton Huzhou Hot Spring Resort is closed and has no way to enter. The designer didn't take Lake Tai's historical maximum water level into account, which leads to the stupid mistake today.”

Sheraton Huzhou Hot Spring Resort is a luxury hotel located on the banks of Lake Tai in Huzhou, China.

The hotel can be seen here in Huzhou on Baidu Maps.

The video was also shared here, here and here on Twitter, alongside a similar claim.

The claim, however, is misleading; the hotel says it was not forced to close in July 2020.

A keyword search on Weibo found this July 18, 2020 statement published on the official account of the Sheraton Huzhou Hot Spring Resort. 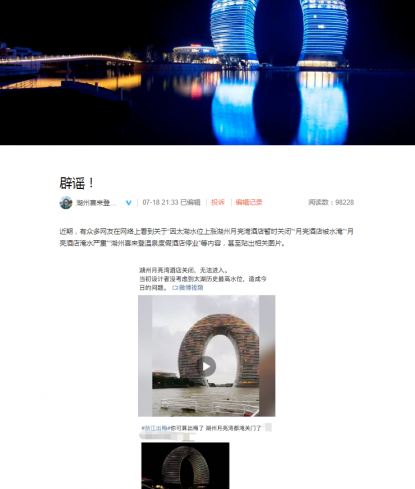 The simplified Chinese headline translates to English as “Rumour refutation!”

The release reads in part: “Sheraton Huzhou Hot Spring Resort (known as "Moon Hotel") has been operating normally. Except for the rising water level of the surrounding Moon Square area and the temporary closure of cruise ships, the hotel has not been affected by the rising water level of Lake Tai, and there is no ponding or even flooding within the hotel, also the traffic around the hotel has not been affected. The online contents are all rumours.” 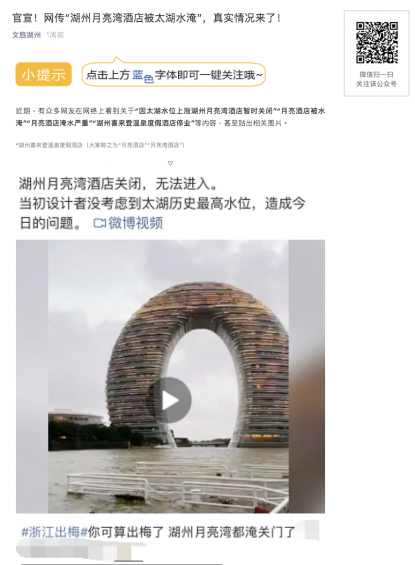 Screenshot of the WeChat post by the Huzhou Cultural Tourism Bureau

A search on both Weibo and China-based online travel agency Ctrip about flooding at or closure of the hotel in July 2020 also produced no results.