A chart purporting to show that the 2009 H1N1 flu pandemic was far more deadly than the ongoing novel coronavirus outbreak has been shared in multiple social media posts. However, the claim is misleading; the posts show an early version of a virus comparison chart that has since been corrected by its publisher to accurately show a lower H1N1 fatality rate. 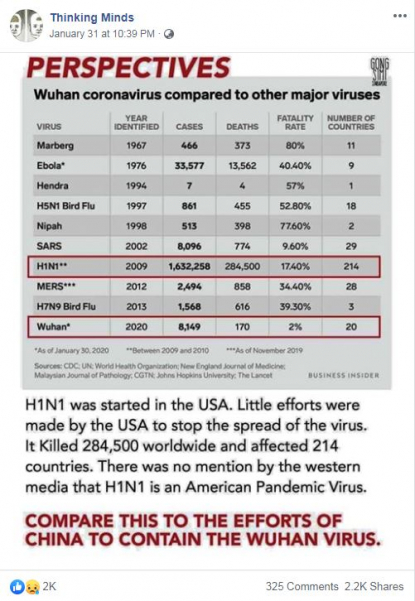 The chart, attributed to Business Insider, purports to show the number of infections, deaths and the fatality rate for several different virus outbreaks in recent decades.

The chart is annotated with the text “PERSPECTIVES” at the top and with the rows for “H1N1” and “Wuhan” viruses highlighted in red. The fatality rate reads “17.40%” for H1N1 and “2%” for Wuhan.

Further text at the bottom of the chart reads: "H1N1 was started in the USA. Little efforts were made by the USA to stop the spread of the virus. It killed 284,500 worldwide and affected 214 countries. There was no mention by the western media that H1N1 is an American Pandemic Virus. / COMPARE THIS TO THE EFFORTS OF CHINA TO CONTAIN THE WUHAN VIRUS."

The chart was also shared on Facebook by the Chinese Embassy in Manila here.

However, the chart is being shared in a misleading context.

Below is a screenshot of the updated chart: 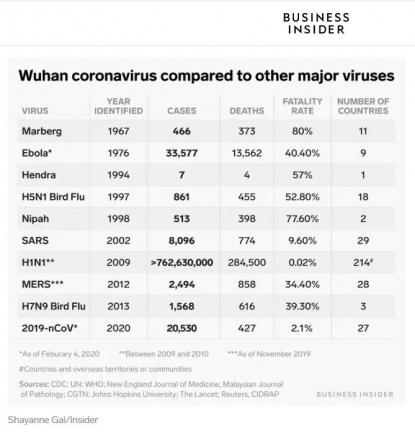 Business Insider issued a correction on the article, which reads: “Correction: A previous version of the chart in this article incorrectly reported the case-fatality rate of H1N1. It is 0.02%.”

It reads, in part: “The virus turned out to be not as deadly as first feared.

"Vaccines were rushed out, but in hindsight, the West, particularly Europe, and the WHO were criticised for overreacting at a time annual influenza epidemics every year kill between 250,000 and 500,000, according to the Geneva-based UN health agency."

Meanwhile, the coronavirus, which was first detected in the central Chinese city of Wuhan in late 2019, continues to spread worldwide. The virus has now spread to dozens of countries and killed at least 1,011 people, AFP reported here.